We have owned two Hobie Kayaks for a few years now, our initial purchase was an inflatable demo Hobie that we bought at a very good price at a Perth Camping Show, I got it home and inflated it only to find it had a slow leak.


I contacted the seller Getaway Outdoor who contacted Hobie and a brand new Hull was sent to me. We liked it but of course there was the hassle in inflating it and carrying it in its rather large bag. We decided to buy a hard plastic version for Vickie and we chose the Outback for its stability.

On our travels we found ourselves in Qld and when we next used the inflatable it had a problem with the inner lining coming apart from the outer lining creating a large bubble. We were close to Sunstate Hobie so called in and was told it was not repairable but it could be replaced or a deal could be done another plastic version which we did. I chose the Revolution 13 this time being a bit lighter and easier to manage.

Fast forward to a time at Ningaloo and I was puzzled why water was getting into the hull of the Outback finally I discovered a hair line crack in the area where the peddles fit. When we got back home I contacted Hobie again and even though it was out of its stated warranty period they offered me a brand new one for $300, considering they cost around $2500 at the time this was a great offer on Hobie’s behalf. Now because I chose another Revolution, this time the 11’ it was actually cheaper and from memory it only cost me less than $100!

So there we were with two new Hobie Revolutions, we used them mainly at Ningaloo partly because of the work involved in getting them up onto the roof rack, securing them and getting them back down again, a routine that became harder with my back conditions.

We live near the beautiful coastline of Safety Bay and have Shoalwater and it’s marine Reserve and islands around the corner, it seemed a shame to have such easy access to a wonderful stretch of water I started at looking at easier ways to transport the Kayaks. A good mate of ours near Newcastle who also has a crook back has a Hobie and I found out he had fitted the Thule Hullavator to his car, this ingenious lifting and carrying system was the answer. We only have to lift the kayak up to hip level to place the kayak in its two cradles, then it’s just a matter of strapping it down and very easily pull on a handle and up raises the kayak, it then lays down flat onto the rack and self locks itself into place. 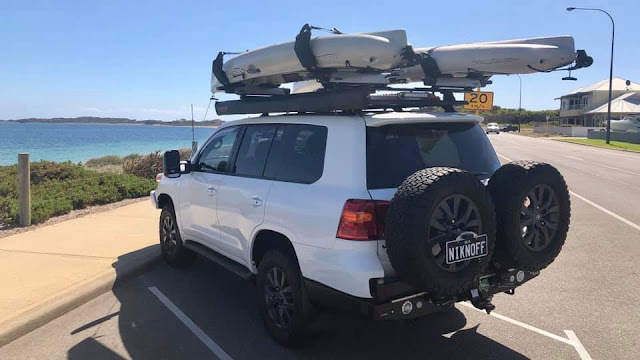 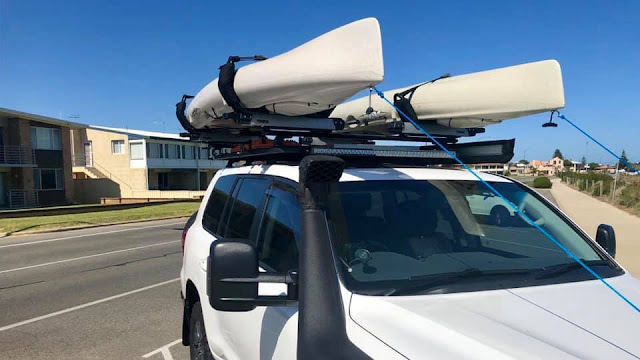 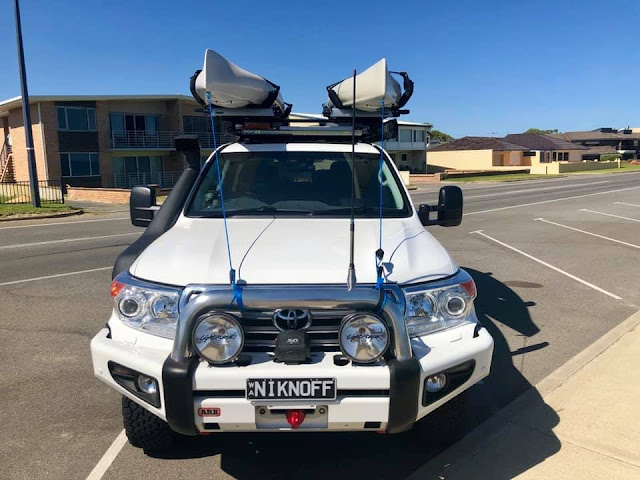 Well we had to have those and one for each kayak, fortunately our local Thule agent Adventure 4x4 had an open day with some very good discounts on products so we bought two Hullavators. Now I have them fitted I can only wish I had done this years ago because we would have carried the Kayaks with us on most of our trips. If there is any negatives at all with the Hullavators is they stick out from the roof rack / bars more than I’d like, looking down the side of the Landcruiser 200 series they are behind the snorkel and well in from the mirrors. Twisting through tracks with tree branches could be the only issue.

I have been asked for some photos in the loading position, because of the width of our aero bars I used a strap to hold one handle in, I have read a tennis ball will do the same thing, I was then able to concentrate on the other handle and supporting the lowering and raising. Ideally in our case it’s a two person job simply because of the width, If I had orangutan arms it would be simple. But it can be done with one person.

One thing I have given thought to was the storing of the kayaks when they are off the car. So I have purchased two sets of Kayak storage lifters, basically they are brackets with pulleys which are fitted to the ceiling beams in the shed and then it will be a simple matter of either pulling on a rope to raise or lower the kayaks on to the cars Thule carriers. 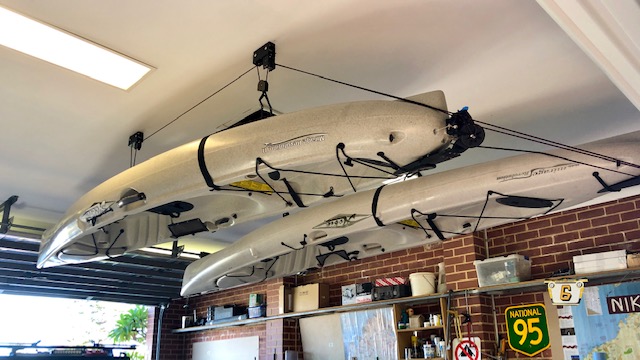 Of course none of this has been cheap but it was certainly made more affordable due to the excellent dealings we had with Sunstate Hobie, Getaway Outdoors and Hobie Australia.