For all the years that we have been going to Ningaloo, 2013 would rate as our most disappointing weather & fish wise. The wind did not appear to ease up though when we think back it wasn't windy all the time, more a routine of windy days, still evenings or windy nights and still mornings. Which is all fine but then we had to contend with the swell and tide changes which didn't cause any hassles like it did many camping down on the 'flats' we had the sand dune offer us some protection from the high tide's.


We took the opportunity to go into Exmouth for a day out where i bought a submersible RULE water pump to enable us to pump out water into the bladder, like all luck we have the pump only lasted twice before calling it quits,taking it back for exchange is less than easy as it has to be delivered to the supplier in Welshpool, another hassle for the consumer! A bigger surprise for us was to come back to camp only to find a dying goat in our annexe! A Message? at least it wasn't in our bed ... Unfortunately there was nothing we could do for it and as i was about to mercifully put it to sleep it died on it's own which was best for all.

Fishing was almost non existant, even our efforts at beach fishing at night was dismal compared to years past. I did manage to catch or should i say it caught me, a rather large Tawny Shark of around 3mt's long, it took some effort to finally get it onto the beach where we took some photo's on Dave's camera and then dragged it back into the water and watched it swim away. Tawny Sharks are not classed as aggressive, they are a member of the Wobbegong species and though they are common to inshore reef's it was the first time i had seen, let alone caught one. Tick off Another box .... 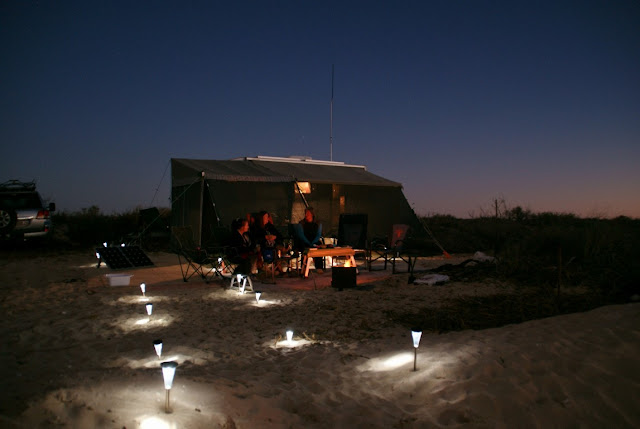 Days turned into weeks and we filled our time with reading, Kayaking when we could and driving through the dunes and fossicking along the beaches. One day we offered to guide friends Elizabeth & Anne and Brett & Doreen through some of the rarely used tracks past the old Norwegian Bay Whaling Station, along with Dave and Joanne we all had a great time, It was surprising to us to find out that many of the campers have not actually explored the area, there is so much to see even if it is only sand and beaches. Before we knew it we were heading into our last week's stay and the weather forecast was not looking good, with rain predicted to be in the region of 50 - 120mm we decided to pull up camp a few days early and with Dave and Jo joining us we decided to make our way home via Moora and New Norcia, taking an extra few days.

In all it took us 4 nights to get home, It's a relaxing drive with less traffic, though some of the hills had Dave's non-turbo diesel cruiser working hard. We have stayed at New Norcia opposite the Monastry 4 or 5 times now, it makes for a good overnight stay, they are now charging $7 per night which doesn't break the bank, it does make us think though when we go and spend $40 - 50 dollars over at the Monastery shop it would be nice to be acknowledged and perhaps get to camp for free. 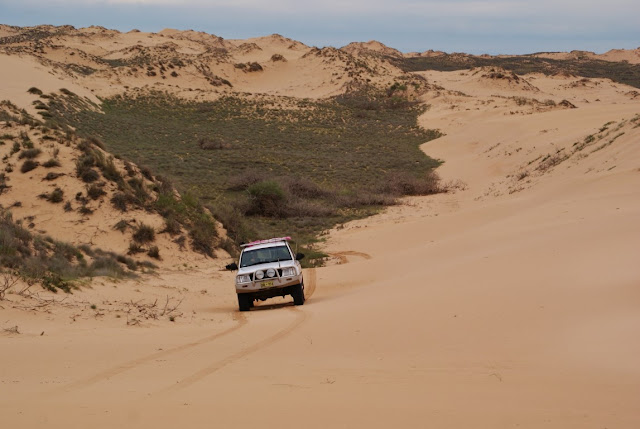 Now we are home, the weather has been sunny days and cold nights. Not a problem as it gives us the days to catch up on the cleaning and sorting out what we need to take for the next part of our journey. We expect to only be home a fortnight, long enough to house sit for Frapper and Curls when they are away. Where to next for us? No idea really, we had thought of heading back North and catch up with our mates Geoff and Vickie for a bit of gold prospecting,but they have committed to work for another couple of months. We may take the Great Central Road across to Alice and then make our way up to Queensland for a month or so until it's time for us to attend the 10th Annual Bushtracker Muster in Alice Springs. We honestly don't have any plans, nor want them as they only get changed anyway. I just hope whatever we do it doesn't involve Hospitals and late night drives.

Something we have been doing for quite a few years is head to one of favorite places in Australia is South Lefroy Bay – Ningaloo Homestead. May and June are our time there but this year we were delayed a few days to me turning 60. My family wanted to celebrate this milestone in my life, at the thought of this I recoiled not wanting to make a fuss but Vickie talked me around and she was getting a lot of enjoyment out of the planning.

When we started planning I had no idea I would have more than a dozen family members attending but the number kept increasing and at last count around 56 friends & family were coming along. We had recently in Feb attended my life long mate’s 60th and Vickie got some idea’s in regards to catering for the event. Unfortunately we didn’t go with the same company they used and though ours was satisfactory it was not as good, thank goodness our Daughter Caddie had made some delicious finger food sausage rolls as well as they went down a treat. The night went off great, far better than I could have imagined, it was very humbling to be surrounded by the many friends and my superb family and extended family.

I take this opportunity to thank my ever supporting wife, Vickie, my daughter Caddie for her help and everyone else that attended, I had a great time, I’m sure everyone else did, THANK YOU !

Well with that occasion out of the way it was full forward in preparation to our trip north. This year we had Vickie’s Brother Allan [ FRAPPER] and his wife Eileen [ CURLS] traveling up with us in their newly acquired Caravan. Brother in Law Dave and his son Trevor were also traveling up with us so we had a CONVOY ….

We left early in the morning to try and beat the traffic on the freeway, it worked slightly and we are glad we left when we did as the roads were still very busy. It didn’t take long though and we were out on the open road heading for our first night at Geraldton and a stopover at our mate’s Geoff & Vickie’s property. The weather forecast was not good with high winds and rain forecast and that proved to be the case. Vick and Geoff again turned on their hospitality making everyone a delicious meal of seafood, I was very surprised when Dave went back for seconds on one dish as he is not known as a lover of crayfish mornay, so it must have been good. Geoff and Vickie also surprised me with a Birthday Cake, wow two Birthdays in less than a week, I am spoilt!

The weather wasn’t kind, with the wind spoiling it for most of the past five weeks, Frapper and Curls stayed their two weeks and sadly they didn’t get to see the attraction that we do, they did enjoy it and so did their two kids’ Dachshunds who gave their little legs a good work out in the sand. Curls ticked off one box with a nice sized Spangled Emperor caught out of her Kayak, and a ‘Charlie Court’ Cod caught off the beach. Frapper is not into fishing and became the camp ‘Bitch’ making sure the area was tidy and twig free. Happy hours became earlier the longer they were there, a trick by Frapper to make the stay go quicker I think.


Trevor is always good value going away with, this year we didn’t get to do ½ the beach fishing we usually do due to the windy weather and wrong tides, and when we did the fish caught are not worth mentioning, except for Trevor's GT which measured out at 1.1mt. Why do we continue to come back? The answer to that is simple, we love the place not just for the fishing but lots of reasons, it only takes a nice day chucked in amongst the rough to remind us why we keep coming back.

Even with the lousy weather we still manage to fill our days in, this year was no different, from sorting out Frapper’s Caravan water  tank problem’s, ‘a Kinked breather hose’ to installing some LED strip lights to our cars. This is something I have been meaning to do for a long time now and this year Trev surprised me with a 5mt roll of LED strip to fit into the canopy of my Ute. The result was excellent, very low power consumption and nice and bright white light lighting up the interior and exterior of the canopy.

Before we knew it we were saying goodbye to Frapper and Curls and Trev as they made their way back home. We were not by ourselves for long though as we had Trevor’s Brother Chris and his mate Mark coming up for 5 days and in the middle of that we had Abby, Chris’s girlfriend flying in for a 3 – 4 day stay. Now you would think with so many people making the effort and expense to come up and see what we and the Billy’s have been talking about all these years the weather would be on its best behavior, but alas no, the wind continued to blow and the fish continued to stay away. 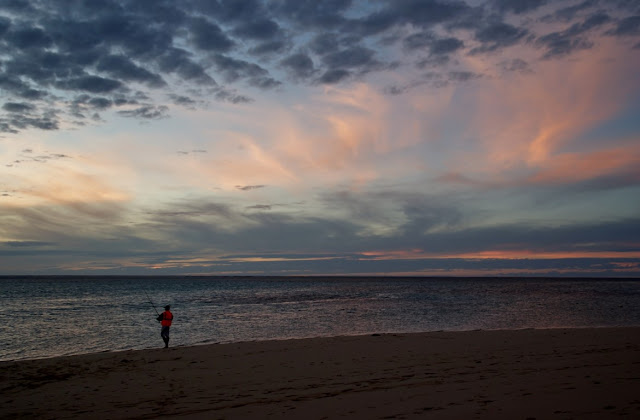 Another week passed and it was farewell to the latest visitors and then there was just the Billy’s and Us, ………… Then the weather Gods started to smile, not in a big way, more like a grin but the weather has improved, Unfortunately my back has been playing up big time and taking away the good feelings I should be having, to make matters worse we had to do another Midnight drive into Exmouth as Vickie had severe stomach pain like she had in Kho Samui. The Hospital kept her in a couple of days and ran some tests, they thought she had a kidney stone but wanted to confirm that so that meant we had to drive down to Carnarvon Hospital for a CT scan, then a few days later back into Exmouth for the results which confirmed the Dr’s suspicions.

Apart from pain management they haven’t done anything else, hoping that by drinking lots of water she can pass the stone, as I write this now on a Tuesday Night she is again in pain and being sick. Whether we stick out the next 3 weeks I cannot confirm, if this continues we may just have to head home where she can get the help she may need to remove the nasty stone.

In between all that’s been happening we have caught up with many people that we know who like us come here to Paradise every year, We have had some lovely Happy Hours, one in particular that continued into the night at Brett and Doreen's Camp, lots of laughs along with Gary and Pam. It’s a small World and we have met people who live not far from where we do, plus a couple of friends who we convinced to buy a Bushtracker, they are extremely happy and haven’t looked back. 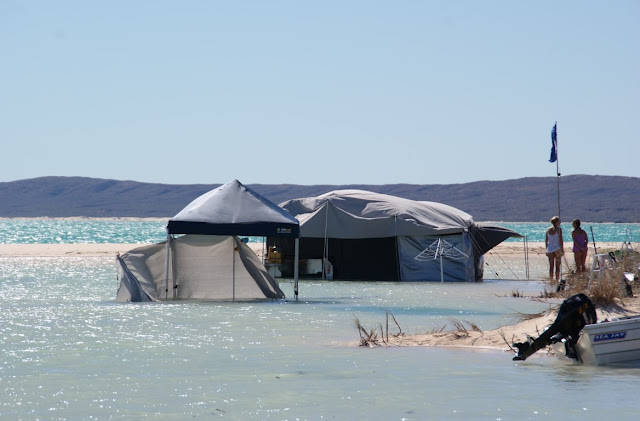 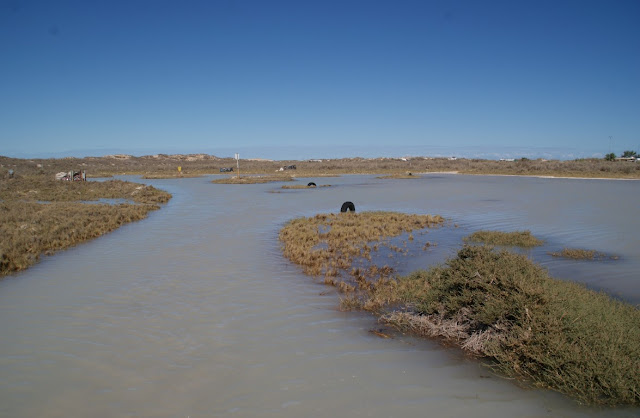