A fair bit has happened since i last wrote about our travels, with the dissapointment of what occurred at Kilcoy now behind us and the recent purchase of the Toyota Ute and the decision to sell our F250 we drove on down to Newcastle and catch up with Kimbo & Ned. As usual we expected to take the best part of the week to get there but two days later we found ourselves pulling up out the front of their home at Fern Bay. It had been arranged with Ned's sister Trisha & Husband Rod that we could all go out to their 15acre property near Raymond Terrace and camp up there for a week. Kimbo sometimes stores his Caravan there so all we had to do the following day was grab some provisions and go camping.

Bro getting his Oz Pig Fired Up 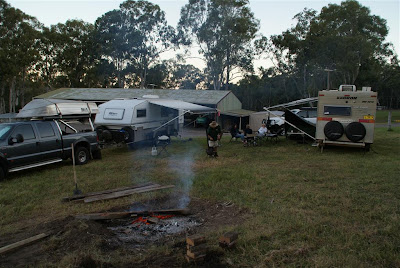 The property is lovely with a nice home, undulating hill's and a massive shed, we set up and proceeded to have an early happy hour which continued for the next week. In between Kimbo & Ned showed us around the district and a couple of times Vickie and i ventured out by ourselves checking out some lovely country town's, hard to believe we were only a short drive from busy Newcastle. Rod & Trisha's son Blake entertained us whislt we were there, a good young fella who gave as good as he got.
I discovered Darby Bakery at Raymond Terrace, the pie's were $1 and specialty pie's $1.50 !! A Bargain and over the next week i spent a few dollars enjoying good pies' at bargain prices. We went for a drive to Newcastle and walked along the harbour where we came across the Queens Wharf Tower, 182 steps up was worth it for the view.

Taken on top the Queens Wharf Tower In Newcastle 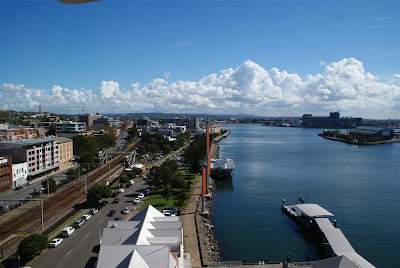 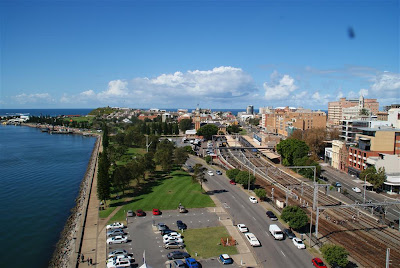 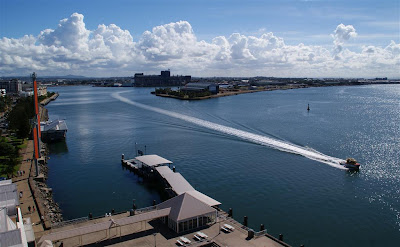 On the weekend we had Kimbo's sister Mandy & hubby Glen join us with their van for the night and we had the most superb camp oven roast pork & beef supplied by Rod who happens to own Morpeth Butcher Shop. A camp oven roast just cannot be beaten in my view and we all had 2nd's and went to bed with bloated tummy's.

On the Tuesday Kimbo drove us down to the Sydney Caravan Super Show at Rosehill, if we had known it was going to take 3 hours to get their we wouldn't have bothered, it also took us 3 hours to get home and it wasn't because of the distance as we were only 120klms away, the Sydney traffic is horrendus with us taking over an hour to travel less than 10klms. The show itself was a dissapointment, we were expecting it to be the biggest & the best but it wasn't a patch on the Melbourne show and we even preferred the Perth show and layout to what Sydney put on. Even so we appreciated the effort to take us there and we did get to spend some money so it wasn't all bad.

The following day, Wednesday we said our goodbye's and started our drive down to Glenelg and our daughters house. With two vehicles now, Vickie drove the V8 Toyota Ute and i towed the Van with the F250. We both have UHF radio's in the vehicles and were able to stay in constant contact, at times too constant as i would cringe when Vickie started chatting away about things that i didn't want other people on the airwaves listening in too. We had been warned about the locusts plague on the Newell Highway and we came across a few patches but it wasn't untill we were on the Mallee Highway that we realised how bad they were. Both vehicles needed the windscreen's cleaned at every small town and hundreds of dead locusts were removed from around the radiator's. Interesting with the different aerodynamics of both vehicles, the Toyota Ute copped more bugs on the windscreen due to it's more upright stance whereas the F250 copped them more across the big bullbar and wider bonnet. We donated some vegies to the fruit fly inspection at both NSW & SA, bad planning on our part as usual we were travelling to fast to plan things better. 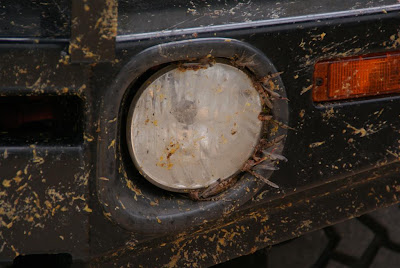 We spent the 1st night at a rest area south of Dubbo and the 2nd night at Sandy Point at Hay where previously we were harrassed by locals doing laps around the camp site late at night, this time no idiot's surfaced and we had a nice quiet night. Our next two nights out were spent at Mannum SA, a place we have stayed a few times previously. Because of the long weekend and Anzac Day we were expecting it to be busy and it was but we managed to get ourselves parked up in a prime position with river frontage.

View from our Caravan Bedroom Window

We had messaged Brian & Lis and told them that we were in the area and they phoned us back and arranged to come out the next day for a visit which they did. Lovely to catch up again with them and we even managed to have an open fire thanks to Brian bringing some wood. We were both tired though from the long drive that day and Brian & Lis left around 9pm, we crashed into bed only to then have to put up with a noisy generator running for another hour followed by a bunch of loud blokes partying on all night. No consideration for anybody other than themselves.

Left Mannum this morning and now camped back on the front yard in Glenelg North for a week before Vickie see's her Dr on Monday 3rd May and then hopefully we will head West with a visit down to Eyre Penninsula and catch up with some friends we know at Streaky Bay.
Posted by Mick at Saturday, April 24, 2010 No comments:

Plan B followed our exit from Kilcoy, I phoned a mate who own's 3 Cabin / Van Parks and told him of our situation, he kindly offered to have us stay in their personal cottage and park the Van beside it for as long as we needed to. We had Caddie & her girls staying with us for another 12 days and our youngest daughter Erin & boyfriend Scott flying out the next day and our son Daniel & his girlfriend Elle then arriving a few days later. It was going to be a hectic time and extremely difficult to try and arrange accomodation for everyone over the Easter holidays so we took up on his offer to stay.

We spent the days showing the kids around, they all loved the Hinterland area and the rainforests and mountain drive's. We did go for a drive down to Surfers Paradise but ended up turning around and spending the rest of the day at Mt Tamborine which they all liked.

Chermside Shopping Centre got a work out with 3 visit's from us whilst we were there, Vickie was fortunate to get an appointment with a Specialist who did some tests on her eye and though he could see some recent damage he suggested she see her own specialist if it required any further treatment. I drove back to Kilcoy for my medical appointment to have another suspect mole removed, haven't heard any news back as yet so no news is good news.

Dan & Elle went to the Australian Zoo, Vickie, Cad & the girls caught a bus for a three and half hour trip that took them 30klms and subjected them to bad BO from the passenger's, I had an easy morning at the Transport Branch transferring the registration over on the new ute we have bought. 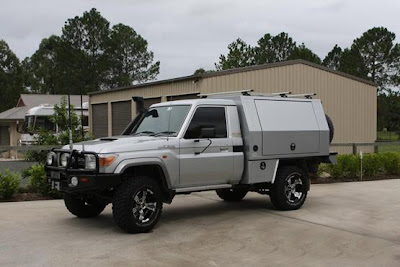 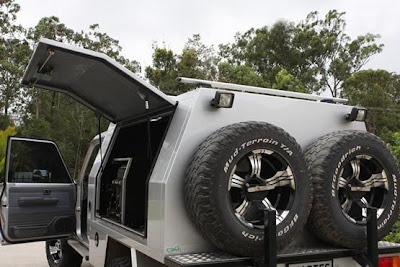 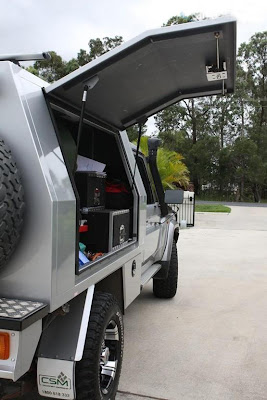 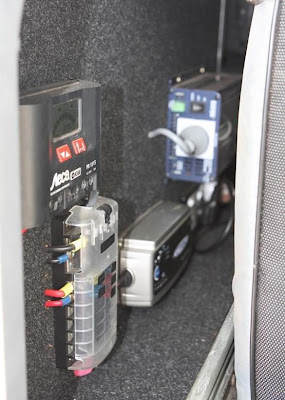 Well, never been one to procrastinate about things i saw a nice Toyota GXL VDJ79 Ute advertised for sale on the net. The model VDJ79 means it's a Cab chassis but this one was different from the usual as it had a full alloy canopy fitted on the back and was loaded with extra's.

If you start adding up the cost of the extra's and the price of a new ute, you will get a shock at what this set up has cost.

So after telling the seller that it was a nice ute but way over priced i received an email two week's later telling me that he dropped the price to what i thought was a great deal considering the amount of money that had been spent on it. We took it for a drive and considered it bought, It took a week to arrange the money and we went and picked it up. So now we have two vehicles & a caravan, we do have the F250 advertised for sale but no interest has been shown yet. We plan on driving both vehicles back to WA where i will attempt to sell it on home ground. The F250 has been a great tow truck but we were finding it more and more annoying as we tried to explore towns and cities. It has to go so if you hear of anyone looking for a nice 2004 F250, please let them know.

We are now at Tewantin, near Noosa, we have booked Dan & Elle into a motel in Noosaville and we are at the Tewantin Caravan Park. They fly back to WA on Saturday and we will head back down to Brisbane and catch up with some friends for the night, then we will make our way down to Newcastle where we will meet up with Kimbo & Ned again and visit the Sydney 4WD & Camping Show.
Posted by Mick at Tuesday, April 06, 2010 5 comments: