After leaving Fulham we criss crossed our way around Victoria, we drove through the Grampians but choose to camp outside the National Park, Cherrypool camp at Brimpaen was a nice spot in the bush, we elected to stay away from the gravel toilet area instead we found a nice spot in a clearing sounded by bush. We were only driving short distances, some camps were only 12klms away from the previous overnight stop. 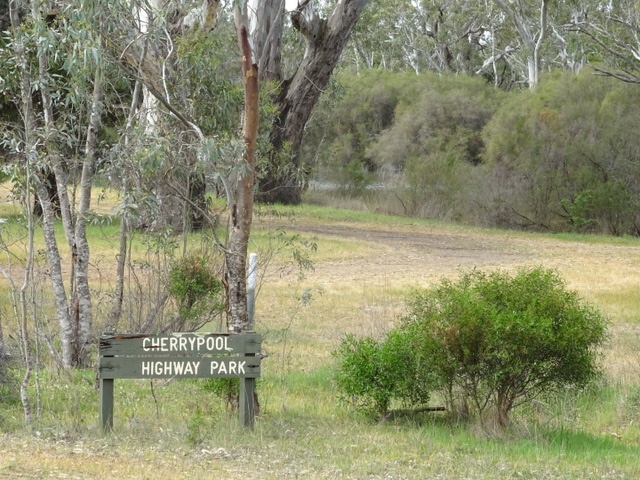 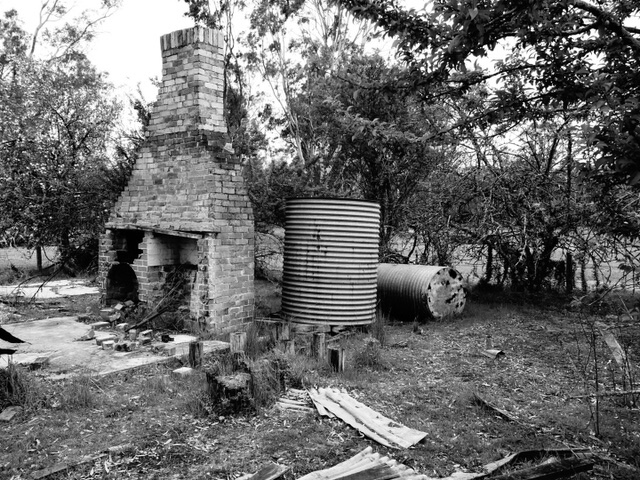 We had arranged to meet up with friends Brian & Lis at Laancowrie Reserve which is beside the Loddon River, 20klms from Maldon. We have friends in Maldon and were calling in and staying a night or two on Monday so that gave us two nights to catch up with Brian & Lis. As usual it's always good to meet up and exchange stories, they were returning from Ahnem Land and had a great experience staying with people they knew. Laancowie was reasonably busy, everyone still had plenty of space but if I have a preference it's looking at no one camped nearby. We did meet some interesting people though, a German prospector and his Asian wife and another couple who came in towing a Ultimate Nautilus Camper, I had read about these bit this was my 1st opportunity to see one. We owned a smaller Ultimate camper back in 2002 and loved it, comparing this to that we both agreed that this was to lavish and expensive for something that requires setting up. 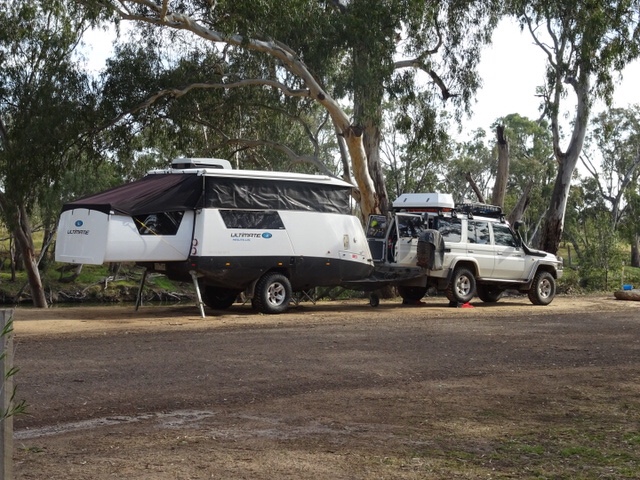 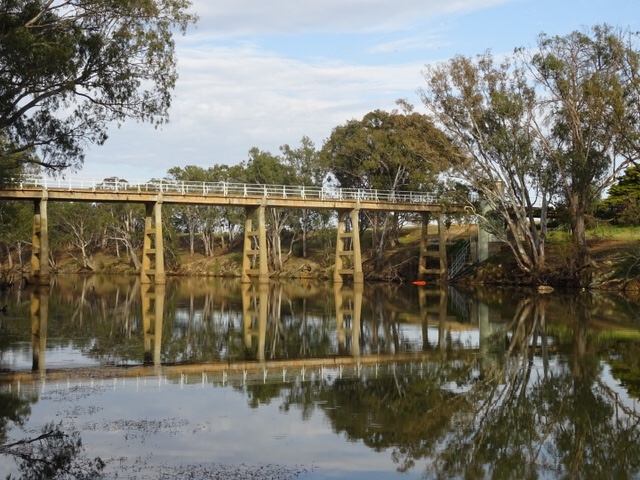 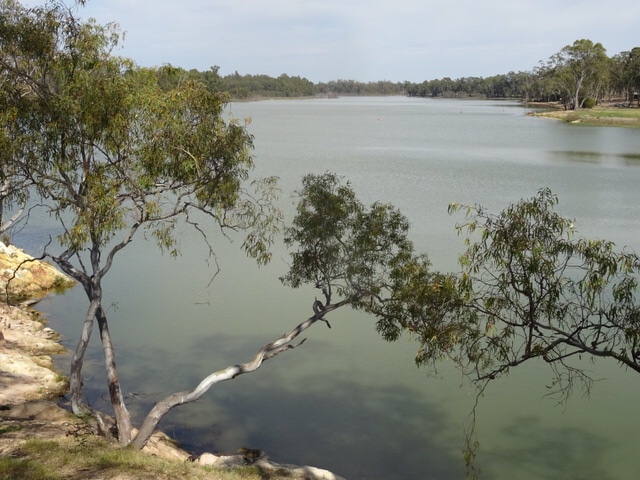 Before we knew it the days had passed us by and we were then visiting Mal & Lynne, the last time we visited they were talking about doing some alterations to their cottage, this time we got to see the near end result, what they have done with the help and expertise of a local builder is transform the weatherboard house into a funky home with a beautiful deck. 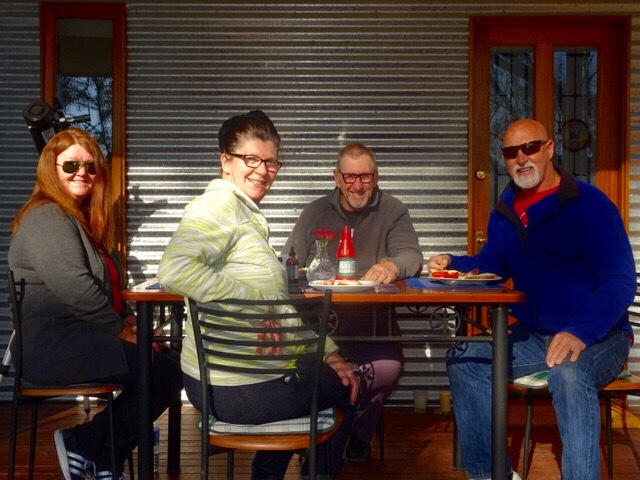 As usual we had travelled to quickly and still had more than a fortnight to fill in before getting down to Vickies sister's home at Mt Eliza, so we continued to criss cross our way around Victoria. We found some lovely out of the way camp spots, one freaked Vickie out because we were deep in the bush at Langi Girhan State Park and she was concerned about bush fires, not that any where around, also there was a late arrival of a vehicle coming in that also had her on edge. We survived the night, and the birds greeted us with the beautiful sounds of the bush. 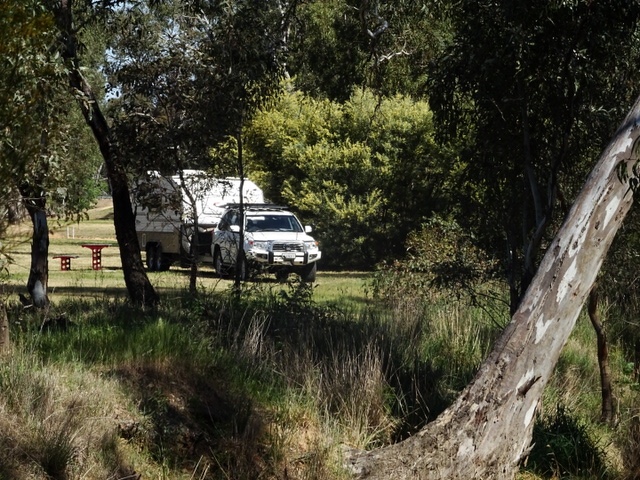 We spent a night at Avoca, and another near Ararat, at present we are camped at Lake Elingamite near Cobden, we intend to make our way back down to the coast and travel along the Great Ocean Rd & the Otways. 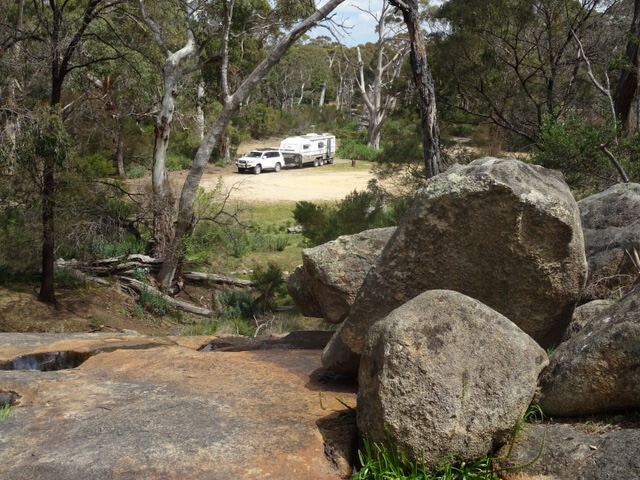 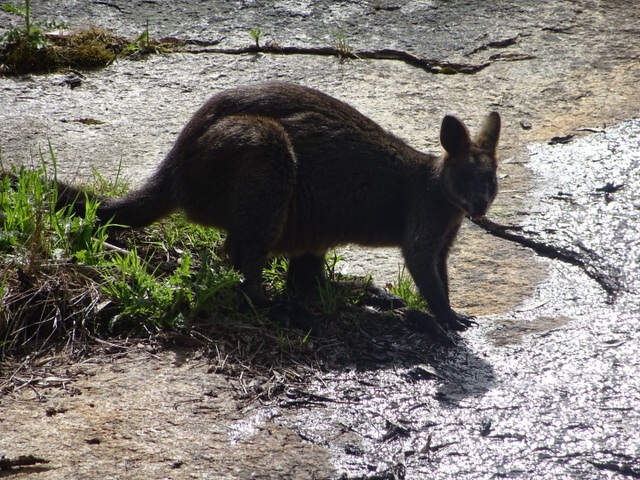 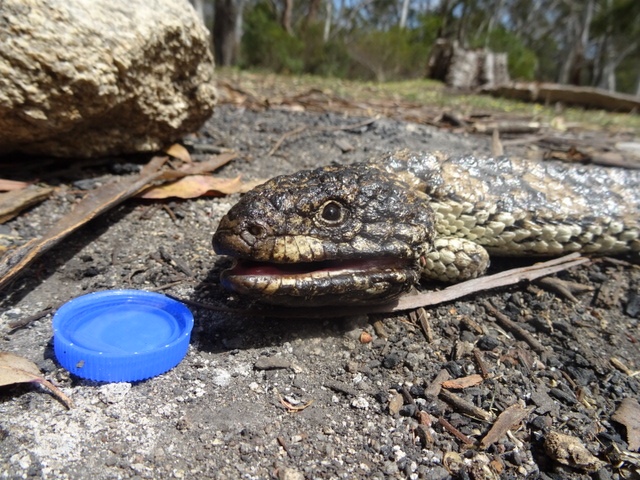 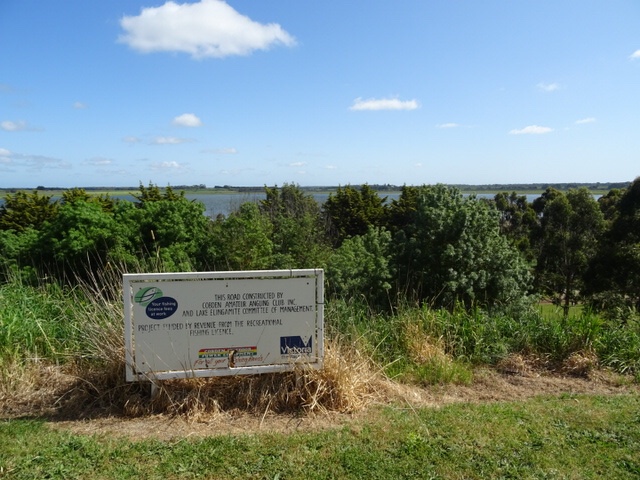 We now have two grandsons and four granddaughters, baby Tate was born in the early hours of Saturday three weeks ago, we arrived at our daughters home in Adelaide mid morning and Tate and his Mum came home a few hours later, amazing! Child birth is easy apparently ;-) 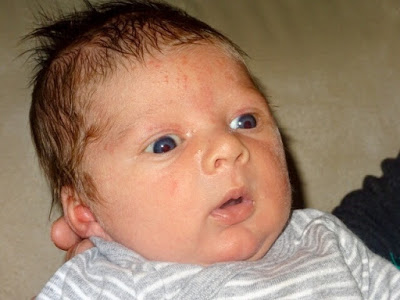 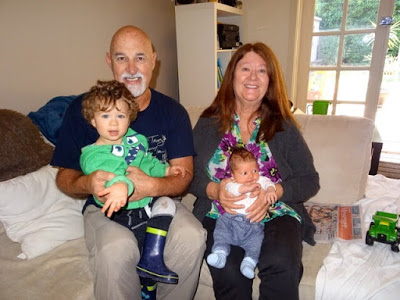 So within a few hours we were holding our new grandson, of course he is very cute but he doesn't do much so my attention was taken with his older brother Oakley who is full of energy and a typical boy except for his hair which is a tussle of curls, he has a beautiful nature but can turn on the screams at will, it was lovely to hear him babbling on incoherently, his vocabulary consisted of mama, dada, hot hot, and a few others but the best was PopPop or Nanma .. Aww melt your heart.

We stayed three weeks and in that time Tate got into some sort of routine, he loves his food and had already lost that new born baby look, he is very alert and moving around a lot, Erin will have her hands full with two energetic boys to look after.

Of course a visit to Adelaide has to involve going to Chicken & Rice in the Adelaide Market China Town, here we have the best simple Chinese meal ever, it's not so much the chicken & rice but the laksa soup and spicy ingredients, it is simply delicious ! 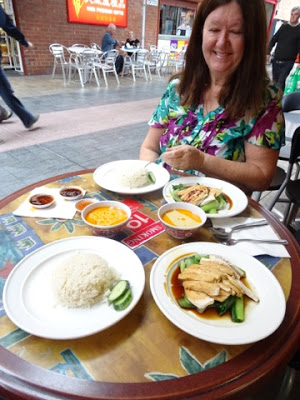 Time to leave and continue on, Oakley didn't know what was happening as we drove away with the caravan in tow, his mouth opened and he just stared ... I'm sure I heard him say PopPop come back ...

We headed for the Coorong where we have previously stayed, our intention was to follow the coast all the way to Barwon Heads and take the ferry across to Rosebud and avoid the Melbourne freeways and traffic, but after staying at 42 Mile Crossing in the Coorong we changed our mind and decided to head inland and find some new camps plus revisit some we have liked previously. 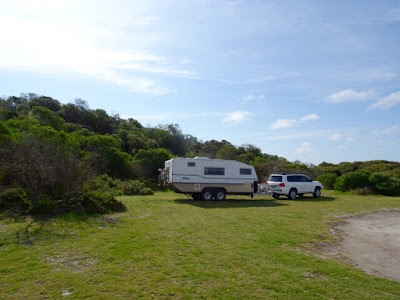 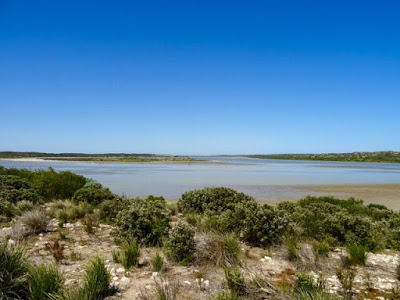 Our second and third night we stayed at a lovely town in Victoria called Dartmoor, it's well known for the tree carvings in the Main Street but it also has a lovely camp area at the end of the road with lush green grass and plenty of shade trees, picnic tables and fire pits are also provided. The camp ground is free and situated beside the Glenelg River, it had water in it but was fairly low and not suitable for canoeing which it is sometimes used for. Plenty of bird life which is always a pleasure to see, I love the bright colours of the parrots we see over east. 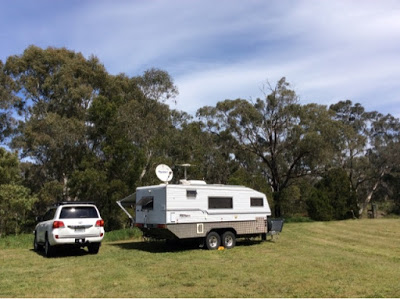 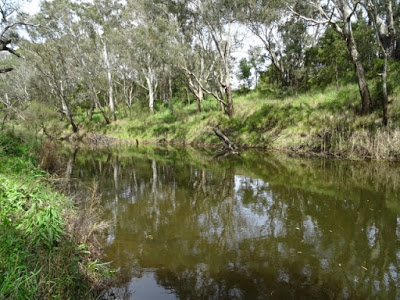 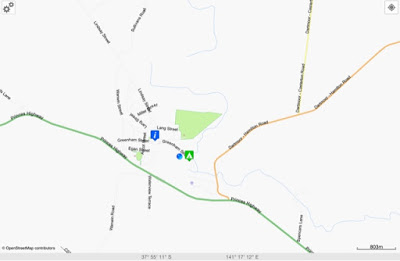 After setting up camp I got the mountain bikes off the van and noticed the new bracket I had made for the bike rack had broken, I was always apprehensive about attaching the bikes to the rear of the van due to the dynamics of bumpy roads transferring the shaking to the bike rack and it appears my thinking was well foundered, fortunately it appears it only broke due to the thickness of the metal I used but to fix it I needed a welder and some thicker steel. I found both at a friendly local named Graham, he was cleaning a harvester outside his large shed and he kindly allowed me to use his tools and found me some suitable flat bar steel. Within 45 minutes I had Mark 2 version completed, I tried giving Graham $20 but he wouldn't hear of it, he is like me, Old School where you help people where you can and expect nothing in return, What goes around comes around.

We spent the Saturday watching the AFL grand final between Hawthorn and West Coast and it was not the result I was hoping for but my son in law Aaron was estatic as he is a proud Hawks supporter, the only downside is we get to hear how good they are now they have won 3 in a row! Give them their due, they are !

Leaving Dartmoor on the Sunday Vickie directed us to a beautiful camp beside another river at Fulham Reserve near Balmoral, this place ticks all the boxes, a lovely deep flowing river which we are camped right next to, no one else close by, plenty of birds, plenty of fire wood. Last night we had a camp fire and used our camp oven to cook a delicious lamb roast and veggies, it just doesn't get much better than this except the bugs became very annoying and we went inside the van and continued our scrabble competition, best of five we are two even, tonight's the big decider. 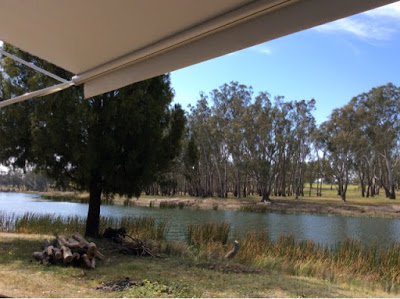 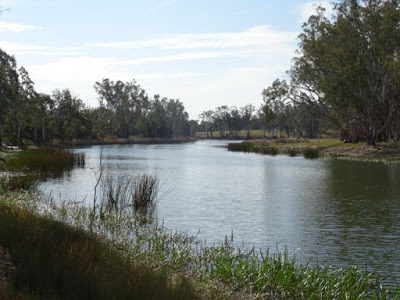 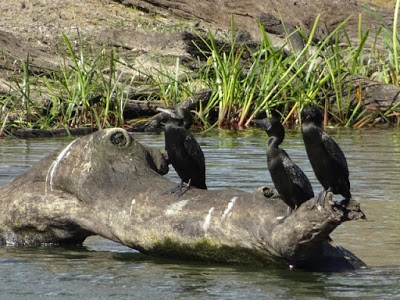 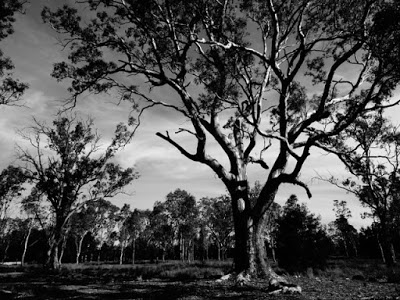 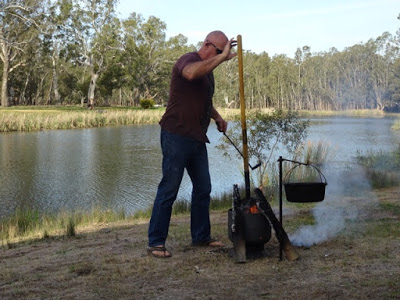 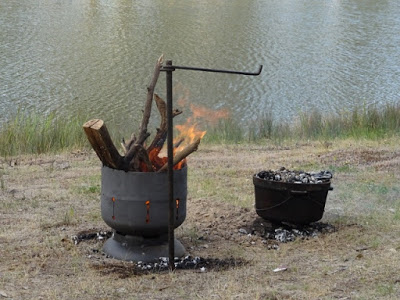