Back on the road - Denial Bay

Christmas 2009 ..... all finished, we had a lovely time back at home and though we 'lived' in our van and shared the cooking duties 7 weeks was long enough. I'm sure our kids living in our home would think the same, our grand daughters are beautiful and at the age where they continue to surprise us with the things they come out with, we will miss them dearly on the next part of our nomadic lifestyle. 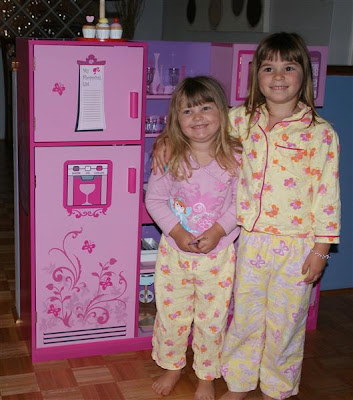 So leaving home we decided to take the great eastern highway instead of dealing with the mobs of people that would have been flocking to the south west, it's hard enough to find a nice quiet spot near the ocean when it's not school holiday time let alone Christmas / New Year. The temperature was forecast to be 40c and they were spot on for the Perth area, where we were on the open road i think temps were closer to 50c!! It was a stinker of a drive even with the aircon on the winds were a hot easterly and we copped them head on for the next two days, economy dropped to what we usually get out of the F250 but at least it didn't get hot like the trip back home, the change of radiator fixed that problem. We stopped at Meckering for 'smoko' which has a lovely memorial rose garden and plaque for the Meckering Earthquake in 1968. 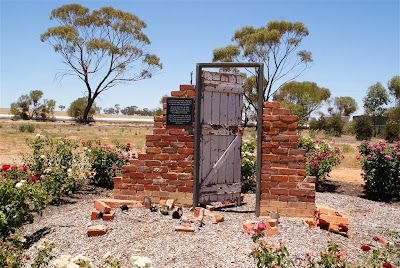 We stopped the 1st night at Boorabbin Rest Area [#332 CAW5] at the temp was 38c inside the van so i got out the Honda generator and fired it up so we could run the aircon, no hardships for us. The flys were horific and we recalled last time we stopped here we had an electrical thunderstorm and the flys were bad then. 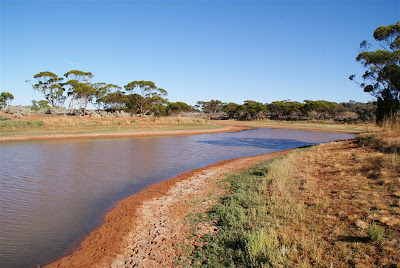 Up early and we were greeted to already high temperatures and millions of flys so we didn't waste time hitting the road again, Another nice spot for a overnight stop would be the gorge just east of the Norseman / Eyre highway turnoff, we stopped for a cuppa but the heat was relentless. Our next overnight stop was at Moodini Bluff [#10 CAW5] we had driven a long time today to escape the constant heat and it was a pleasent cooling breeze that greeted us when we pulled in and 'set up camp' not that we have to do much, open the door and windows and get a cold drink out of the engel.

Our 3rd night we thought we would drive down to the town beach at Point Sinclair 21klms Sth West of Penong, we had stayed here last January on our trip over and enjoyed it, as were driving in on the dirt road we started to remember some farmers that we met telling us they bring their caravans down over the Christmas / New Year, it wasn't untill we drove over the last hill and saw the parking area full of vans & vehicles that we realised what they meant. We had no choice but to continue down the hill so that we could turn around and head back out, we caused a few raised eyebrows as i did a 3 point turn to face back up the hill. 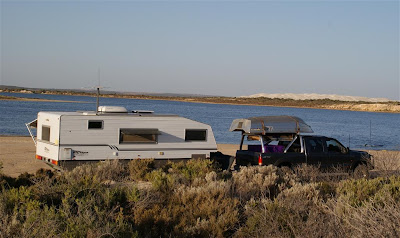 We had spotted a large lake on the track in with a vehicle parked on the sandy beach so we thought we would give that a look, speaking with the couple who were enjoying the serenity we decided to take the chance and stay the night even though we saw a hand written sign saying no camping. During the afternoon a few other vehicles came in with the owners either swimming or water skiing, no one hassled us and we made sure we didn't leave any rubbish the next morning when we left. Refueling at Penong at a very reasonable price of $1.24 litre we stopped at the cemetary and had morning smoko, something we do everytime we pass the town of Penong. 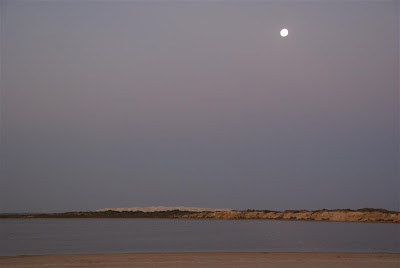 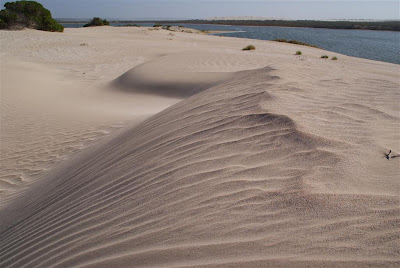 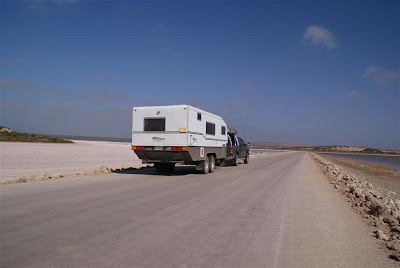 Another place we have visited before was Denial Bay just before Ceduna's border inspection, as we had some vegies to consume we decided to go back for another look at a spot we camped previously. To much delight we found it and no one else was on 'our' patch of turf - or dirt should i correctly say. The temperature is down to a pleasent 27c but the ocean winds are up in the gusty / blowy cyclone level, still that means no fly's and it gives us time to catch up on a few things. We will most likley stay here a couple of nights before moving on and down the Eyre Penninsula again. 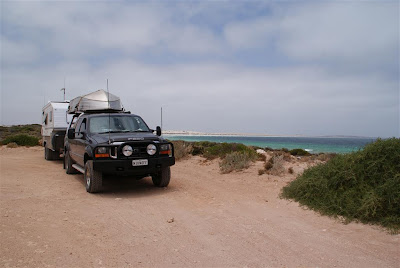 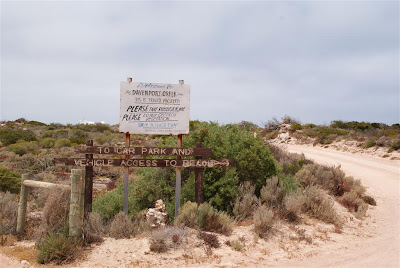 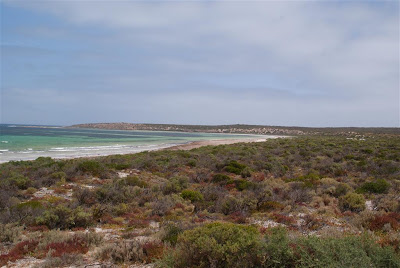 Since being home we contemplated with the idea of selling the F250 and buying a Landcruiser again but that didn't eventuate as we only had one strong enquiry and that fell over. Since then i have been arranging where our gear goes and making a false floor in the ute of the Effy to enable things to be more secure and organized, part of me thinks it's been a waste of time as now i have restricted where larger things can go, time will tell if it's any better and if i end up reverting back to what it was it hasn't cost me much.

F250 has been serviced and a new radiator fitted after it was found to be partly blocked.

Bought a 'Demo' Hobie Inflatable Kayak at the Perth Camping Show for what i thought was a bargain price, used it once and found that one chamber deflates over time, so it went back and i have been told that the problem cannot be found so they are replacing it with a brand new one .... Well Done Hobie !! I can't complain about the after sales service. 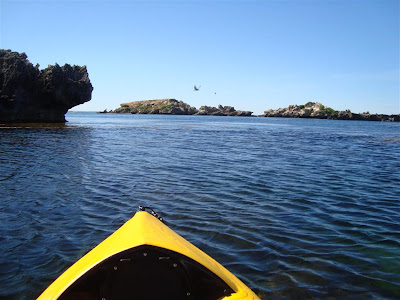 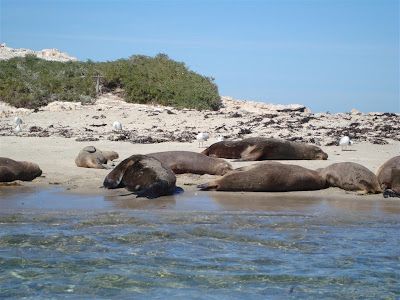 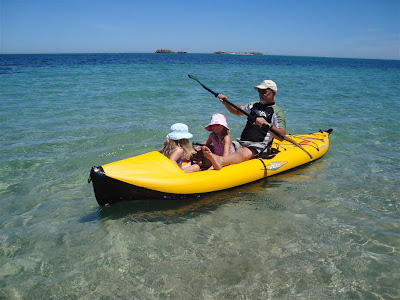 We wish you all a safe and very enjoyable festive season.
Posted by Mick at Tuesday, December 08, 2009 1 comment: