I had our escape from the ferry terminal all worked out, our vehicles GPS had different idea's. Unbeknown to me at the time the settings on the GPS excluded motorways, so instead of getting onto the West Gate Bridge and heading towards Ballarat, the bitch who lives in our maps directed us a different route. Eventually we got to Bacchus Marsh and onto the Western freeway, we probably wasted an hour of our time but we did get to see an area we wouldn't have.

We stopped for the night at a free camp just before Ararat, the same place we stayed at on the way over. Next day we did a shop in town before heading further west. Instead of getting into Erin's home late in the evening we chose to stay along the Murray at Mannum. We have stayed here a few times in the past but now they are charging a fee to stay, we did not have $10 in coins to insert in the fee machine but we stopped anyway, prepared to explain to the ranger if one turned up but no one did. 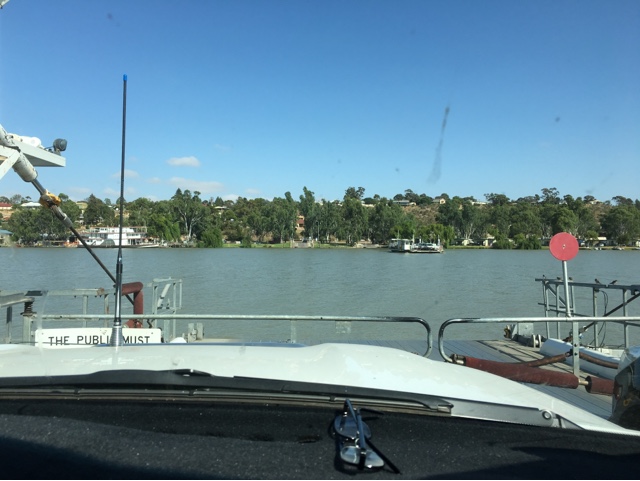 The next morning we drove the scenic route through the Adelaide hills instead of the motorway, arriving at our daughters around midday. We were excited to see Oakley & Tate, Oakley is 23 months old and a real live wire, Tate was just a week old when we last saw him and he had changed a lot in the four months we had been away. Our daughter has her hands full with two boys, we would love it if they lived closer to us. Our time there wasn't all fun, my body was racked in pain, all my joints were hurting, I was getting stabbing pain in my back with any movement and I was feeling down having to deal with the pain and lack of mobility, then my stomach started to twist itself inside out, both Vickie and I had come down with a gastro bug, it was my turn 1st but by morning I was feeling a bit better, enough to take the car to CMI Toyota for its 20,000 klm service. It was Vickies turn to be ill that night, it affected her worse, we had also heard that Vickies elderly father was not well with failing kidneys so Vick changed her mind about flying home, instead she would drive home with me.

I had planned on calling in on friends at Ardrossan and Streaky Bay but we decided to not stop and just get home as quickly as reasonably possible. Sorry Jar and Pam Lloyd and Heather.

We are home now, the outlook for Vickie's dad is not good, but he has lived a ripe age of 91, it's time for us to stay home and be there for him when his time comes.