This year has been a bit of a rush, I took the van to Queensland for repairs and on the way back we caught up with friends, visited a brother, visited a sister, and stayed in Adelaide and baby sat our grandsons for three weeks. We got home a week and a half ago and we have not stopped catching up on jobs and preparing for our annual trip to Ningaloo.

The first job tackled was get our Oyster Satellite dish looked at, when we were leaving our daughters home in Adelaide I pushed the button on the remote to lower it down but it didn't budge, after checking everything I could think of I called a couple of installers but all they could do was tell me how to manually lower it down and that it needs attention by a service agent. So that's what I did, AMI Marine is the main office for Smart Sat and an easy half hour drive from home, I arranged a day to take the van in and Ian their technician quickly had it off the roof and on the test bench, I had a few things to do so it wasn't until later in the afternoon I came back to tow it home.

It was disappointing that when I tried putting it up all it did was go around and around, just our luck, a phone call to let AMI know I would bring it back in the morning. With Ian away working on a multi million $ boat it was left to Aaron at AMI to solve the problem, the short story is it was mystifying, we tried our dish on their control box, our control box on their dish, we tried it on the test bench, we tried it in the van, each time we got a different result but not one that worked properly. Aaron suggested leaving the control box and he would do a factory reset and software update and to come back after Easter which is what we did.

Coming back for the 3rd time and hoping that things would be fine didn't go to plan, this time I had Craig doing his best but with another 3-4 hours of checking, testing, dismantling the LNB and installing quality ball bearings instead of the plastic balls, Aaron & Craig finally found the problem was our control box with a intermittent gremlin, he kindly offered us a replacement control box to take away and he would try and fix the problem with ours, if not were up for a new box.

I take from all this that there are still companies out there that try hard to help their customers, the amount of time spent on solving the problem would have cost many hundreds of dollars, apart from the initial service cost for fixing the jammed azimuth gear I was given no bill. If anyone is in need of their Oyster Sat needing attention I can recommend AMI Marine in Cockburn WA.

Whilst the Sat Dish was in being looked at it gave me time to cut and grind off the old chine bars on the caravans draw bar. One had broken and though I welded it up in Adelaide it had broken again by the time we got home. There was nothing else to do but remove the old and fabricate and weld in the new. Luckily I have a good mate who's trade is a Boilermaker Welder and he came and got down and dirty welding on the new bars. 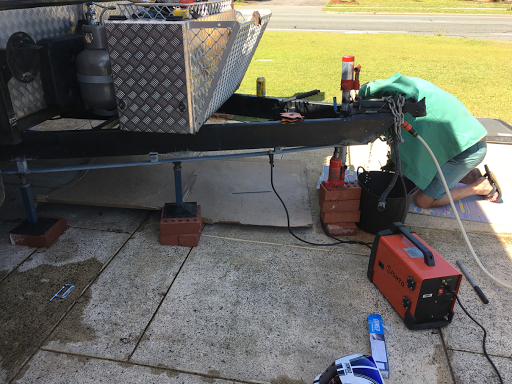 When we were in Adelaide I had new tyres fitted to the Landcruiser, shortly after I saw on a buy and sell group a set of new Landcruiser Sahara wheels and tyres for sale for a bargain price. I had never liked the style of the rims that same with our 200 series and was very pleased to change them over. Of course this meant picking them up from my sons house where they had been delivered to and then finding a tyre shop that didn't want the World to remove and refit and balance the wheels. One company K-Mart Tyres & Mechanical wouldn't even quote, they flatly refused, quoting some ridiculous rule, personally I think it's more to do with them not selling the tyres in the 1st place. Another company wanted $56 per wheel and another wanted $30, needless to say I opted for the $30 per wheel. I am very happy with the look of the new rims and tyres, I had BFG KO2's in 285x65x18 fitted in SA and they have proven to be a good looking, quiet tyre with excellent handling and steering control. 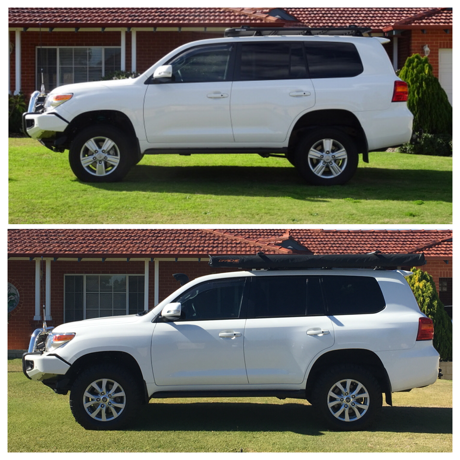 A few minor jobs have been done, replaced a hose for the potable water supply, tensioned a window blind, reattached a water pump that had come lose, with all the jobs completed all we have to do is sort out what we taking away with us again and get it packed. This year we have a Dave and Jo coming up with us and with big changes because they now have a 20' JB Scorpion caravan and Landcruiser 200 series as well.

What an experience we had, our youngest daughter Erin who is married with two young boys lives in Adelaide, she was working for Qantas prior to having her kids but now the youngest is 18 months and his older brother is 3 it was time she rejoined the work force to help increase the family finances.

This is where we came in handy, Erin had to do her refresher course in Melbourne and Sydney, Scott the husband works so there was no one to look after their boys, except of course for us. The last time we had to baby sit for anything longer than a day or overnight was over 30 years ago, and they were our own kids, this was going to be an experience.

We eased into it gently with Erin away for a couple of week nights before coming home for the weekend, we also have the boys going into child care two days a week and Scott was home at night after work so it wasn't as if we had them 24/7 ... but gee it sure felt like it. Actually both boys were good for us, mostly the tantrums started when their Dad or Mum came home. 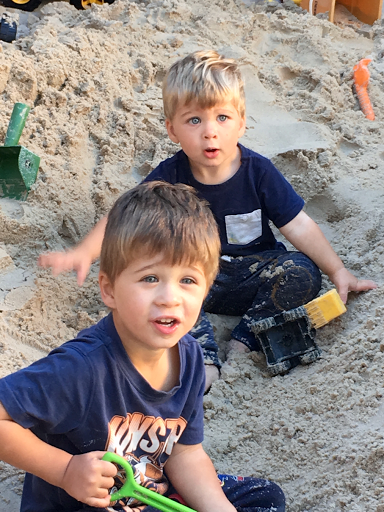 We soon got into a routine, Vickie was in charge of meals and washing, I took care of the playing and baths and nappy changing on the youngest. Thankfully we had Oakley going to the toilet for big boys pooh's but he occasionally had an accident.

Most days it was a visit to the ice cream shop, Glenelg has a Yo Go shop where you serve yourself with the yoghurt ice cream and add the toppings, its then weighed and you pay the cost, we were a bit heavy handed the first time and it made for an expensive treat, but we learnt for the next times.

When we had them all day we went for a drive, one say we drove to Victor Harbour and rode the horse pulled tram across to Granite Island, both boys enjoyed it and it made for along day so things were nice and quiet on the drive home. 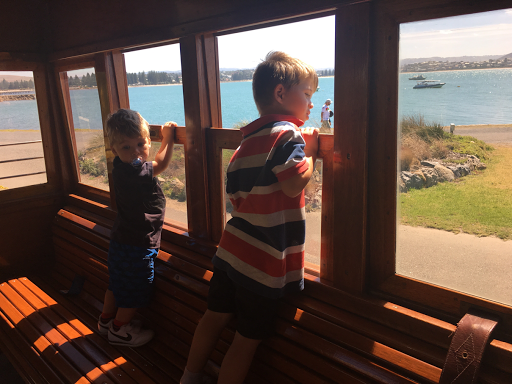 Another drive to St Kilda where there is a large fun park with many different slides and flying fox's, swings and climbing apparatus, Tate was a bit young but he enjoys the swings and he did come down one enclosed slide which surprised us, Oakley was in to nearly everything and wasn't scared at all. 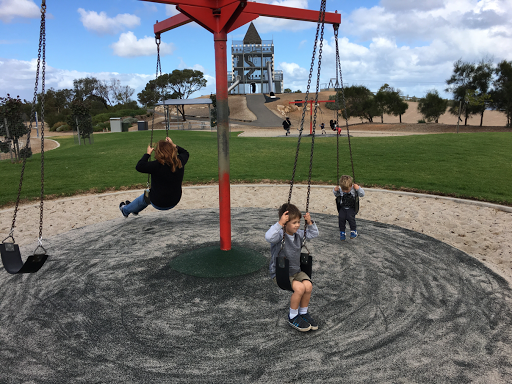 The days the boys were in day care, Vickie and I caught up with our own chores, I had tyres to get for the car and also needed two for the van, I'm glad I did it whilst we were in Adelaide because we don't have much time when we're home before we go away to Ningaloo at the end of April. I have a new hose line to fit for our potable water system, the Satellite dish needs some repairs because it refused to retract the day before we were due to leave. It meant me having to call some experts and finding out the best I could do was loosen some bolts and lower it manually and have it looked at by service agents when we can.

So after nearly five weeks of being in Adelaide, three of which we were baby sitting, we finally hit the road on Friday the 7th at 4AM, yes early because I didn't want to deal with the traffic and I also wanted to get some kilometres under the wheels. We ended up driving 1000klm before finally stopping, the next day was similar and with just another 800klms to do on the third day we arrived home on Sunday at 4pm.

The trip was easy but extremely painful because my lower back was in spasm's sending sciatica pain down my legs, I was having to stop every few hundred k's to get out and stretch the legs. Not a lot of fun.

No problems with anything, the Landcruiser 200 makes an extremely good tow vehicle, the BushTracker towed perfectly, economy wasn't as good as my trip over, all the extra weight that Vickie bought and packed in plus my speed was higher than I normally travel. Still it was averaging around 19-20 litres per hundred kilometres except for one tank full which was around 26LPH ! The head winds can be a killer for economy.

Now we are home we have a lot to do before embarking on our annual Ningaloo trip, Dr's, Dentists, Van & Car maintainance etc
Posted by Mick at Monday, April 10, 2017 1 comment: