Back on the road again even only for a few days, between Dr's visit's we thought we would go down to the Fluerieu Penninsula for 5 nights to give us a change of scenery and give Erin & Scott some space from the 'olds'. The traffic was it's usual crazy self and it was a nice relief to finally get down to a place called Rapid Bay, this was a $5 per adult camp with green grass fronting the Bay, there were two jetties one being very new having only been opened on the 11th March, already it was proving popular with many anglers lining along each side trying their luck on the Tommy Rough's [Herring] Personally i couldn't be bothered so all we did was check it all out and walked around the town, not many locals about in fact we saw none, only a few cars around and the local general store had closed up shop permenently it appeared.

We stayed two nights and with the warnings on the radio & Tv about a storm approaching i took down the awning and put everything away, just as well because that evening the winds picked up and the next morning we awoke to the sound of rain coming down upon the Van, a lovely sound & feeling all cosy inside. We decided rather than stay coped up in the Van that we would leave and check out a few other spots.

Cape Jervis is where the ferry goes across to Kangaroo Island, this was about as close to K.I that we would go, the costs are high around $650 to take a smaller rig than ours across seemed expensive for what was over there, and the time that we had.

We drove along looking for a camp site in the Conservation Park but why they charge such high amounts to camp in the bush amazes us, $23 for the 1st night and $15 a night there after deterred us from staying especially as the rain was still coming down and the threat of falling tree limbs didn't enthrall us, perhaps in nicer weather conditions we would appreciate it.

Plenty of Winery's along the country roads and the scenery of steep rolling hills made for a nice drive, untill i felt the auto gearbox in the F250 appear to falter as if the torque convertor was not allowing full power through, When we arrived at Victor Harbour i checked the oil levels and it appeared to be on the low level so i topped it up with 3/4 of a litre bottle, since then all is working fine but upon checking levels again it now appears to be over full. Oh well it is due for a service so i will have Ford check it over, thankfully the truck is still covered by full warranty should there be a problem.

Leaving the Penninsula, we decided to go and check out some camp sites along the Murray River, this turned out harder than it seemed and with constant checking and re-checking our Camps4 book along with using the GPS waypoints we still could not find the sites we were looking for, we ended up crossing the Murray River on the ferry [Free] and we are now at the free camp site on the easttern side of the Murray at Mannum. Tomorrow we will take a look around the town and decide whether we move somewhere else or stay another night and head back to home base Glenelg on Sunday.

Not much is new, Vickie visited the GP today and had most of her test results back which were all normal, just the test for the 24hr blood pressure monitor to wait for now. Another appointment has been scheduled to see another Specialist on the 20th, so fingers crossed he says something can be done.

In the mean time my lower back decided it wasn't getting any attention so it started behaving strangely, i was getting burning sensations across my left butt cheek and groin area, very painful so thinking it may be hip related i went and visited a GP, he diagnosed lower back sciatica and i went and had a CT scan which confirmed his diagnosis, i was to have some facet joint injections done under X-Ray on Thursday but over the Easter break the pain got progressively worse, and then the blisters appeared on my lower back, very weird untill a friend of Erins mentioned SHINGLES ... sheeeeeeeeeeeeeeesh! Shingles, caused by the chicken pox virus, IF you have had Chicken Pox then there is a chance you will suffer from shingles at some stage, very painful i can assure you. So after throwing more $$ at the SA medical & pharmacutical fraternity i now have a box of tablets to take ..... wish it was that simple for Vickie.

Our days have been spent just looking around Adelaide and districts, another couple of weeks and we fly to Melbourne for a few days to visit Vickie's sister Sue and her family, then we intend to hook up the van and head to the Murray River for a few weeks & catch up with friends Mally & Lynn before the next round of Dr's appoinments.
Posted by Mick at Tuesday, April 14, 2009 5 comments:

We seem to be in a state of limbo, Having just completed another series of tests & specialist visit's it appears we may as well take up residency. Vickie has another specialist appointment lined up on the 20th to find out whether the eye damage can be rectified or at least improved by some laser treatment. After that she is expected to come back and see the specialist every 4 weeks for 6 months !!

So ........ we are gazumped, we will take each week as it comes and see what happens, if we have to hang around we intend to go away for 3-4 weeks at a time and come back for the medical appointment. By the time we leave SA we will know it inside out :-)
Posted by Mick at Tuesday, April 07, 2009 No comments:

Our time in Adelaide has been spent going from Doctor to pathology and Xray departments... so far the reports have all come back normal which is comforting but also worrying as we still don't know what has happened. The Doctor Vickie is seeing has arranged a glucose tolerance, ECG and a 24 hour blood pressure monitoring system to be done next week, along with a visit to a private orthamologist specialist in the hope that he can find out why and what outcome can be expected, her eye is still blurred with minimal vision.

We have managed to have a look around Adelaide and suburbs and we are impressed with the beautiful old character homes. Beautiful deciduous tree lined streets give the whole of Adelaide a lovely outlook, it's a shame the roads are not up to the growing population and traffic congestion at peak times is common.

Glenelg Foreshore is a trendy area with Lot's of glitz and glamour, China Town in the city is a fascinating area, the meals are very reasonably priced at the many restaurants and Haarndorf which is a lovely hill side village with a German theme, plenty of Kransky and Bratwurst sausage for sale around these parts. Lots of cafe's around, the Adelaide people appear to eat out a lot, the markets have everything imaginable for sale. 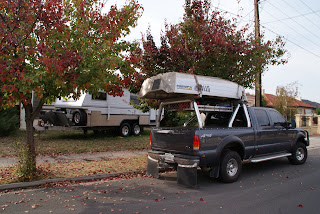 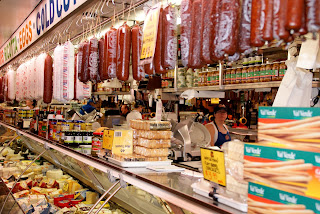 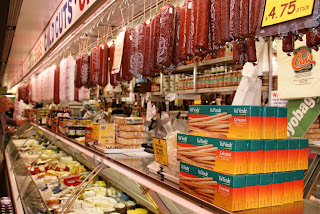 Today we are going for a drive to meet up with another Bushtracker couple who live in the Mt Barker district.
Posted by Mick at Friday, April 03, 2009 No comments: