We all know that time doesn't stop and sure enough with patience - yeah right .... the time came around for us to hook up the BushTracker and make our way North to spend 11 weeks along the coast at Ningaloo.

The hip replacement went well, chalk and cheese compared to my other hip that was replaced 7 years ago. Bending is an issue and one that frustrates the hell out of me, it's bad enough not being able to be flexible in the hips but my lower spine was fused many years ago and is increasingly becoming worse, but that is not enough to stop me heading to Paradise.

We left home after assuring our granddaughters Millana and Ruby that we would return sometime in July and would continue to send them post cards while away. Our 1st night on the road was heaven or as close as we could get, camping opposite the New Norcia Benedictine Monastery, we had a very peaceful night even the occasional trucks that went past didn't bother us. After living in the van at home for four months near a busy road with the usual idiots doing their burnouts, a night in the 'bush' was bliss.

We had intended visiting our Mates Geoff and Vickie in Geraldton on Saturday but a phone call changed that to "get here tomorrow" so that's what we did. As we drove into their road we got a call on the phone, it was from another mate Tony Harding who was driving past and saw our rig and recognized the number plates, a quick chat on the side of the road and he had to head off back to the farm. Now our last visit to Geoff and Vickie's ended in a bit of stress when i was left to get the van out of their driveway, a narrow drive and tight turn at the end was not a lot of fun. This time Geoff assured me he would be there for the departure, so in we went. No problems, Vickie entertained us for the few hours until Geoff arrived home from work and then we spent the night reliving our many tales of each other.

Saturday Geoff and Vick drove us around Geraldton and districts which was great and very appreciated, another beautiful meal of Baldchin Groper and wedges for tea Saturday night topped off a great day.

Sunday Morning, after a Delicious Bacon and Egg breakfast it was time for us to head off and with Geoff's help on the two way radio we soon had the rig backed out on to the road, waving our farewells.

We continued on and spent that night at Bush Bay south of Carnarvorn, we had stayed at New Beach in the same area when we came up last year and i was apprehensive about the weather as when it rains around here the ground quickly turns to slop as it did last year. But no need for concern as the night was clear and apart from a Dog or Dingo stealing one of Vickie's new leather sandals the night was peaceful. 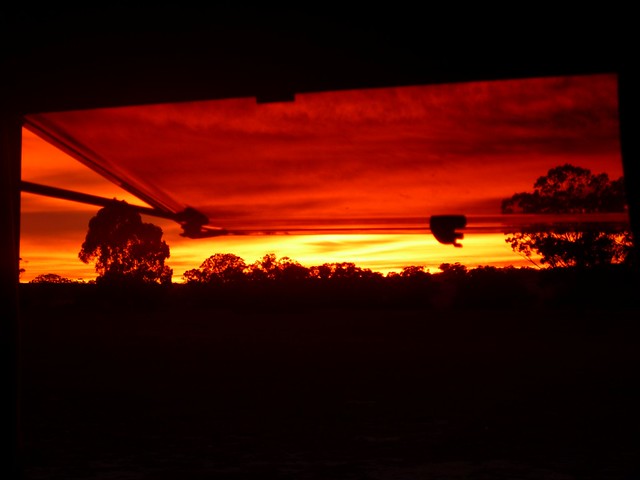 Sunrise view from the Van's bed

Next day a quick shop in Carnarvorn and re-fill of the diesel tanks we continued on to Ningaloo arriving at the homestead around 3pm, another 45 minutes and we were driving into South Lefroy Bay our home for the next 11 weeks. We quickly set up the awning and unloaded some gear and just had enough time for a sunset drink toasting ourselves and just how lucky we are to be able to be in such a magnificent part of Australia. 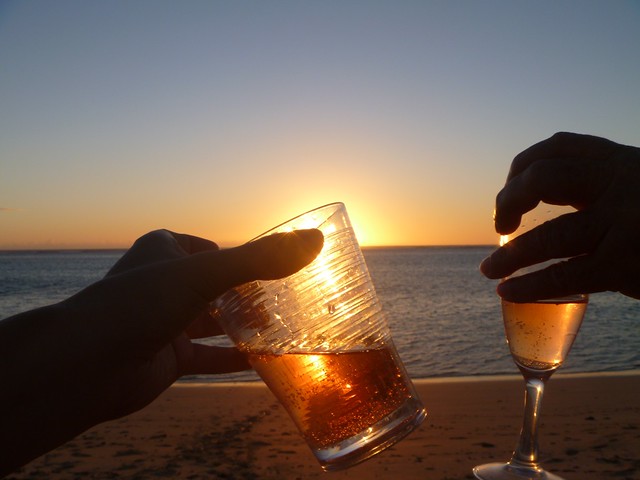 Not much time for a rest the next day as i had to drive back out to the main road and pick up our Daughter Erin and Fiancee Scott who had flown into Exmouth from Adelaide for a 10 day stay. Flying in the could not bring much gear so our camp had to have double of most things except we got the VAN! they got the TENT ... 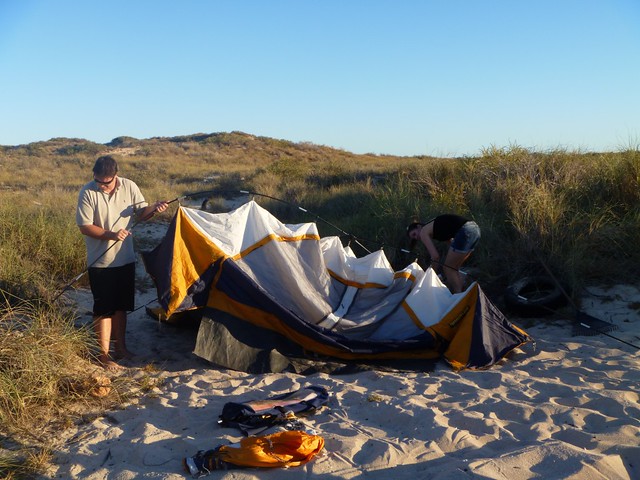 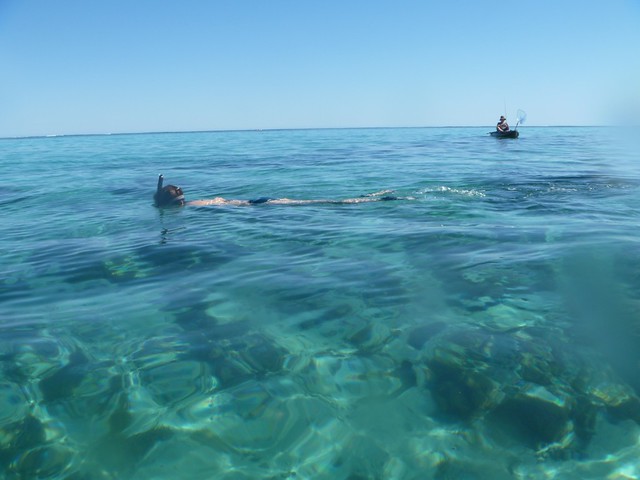 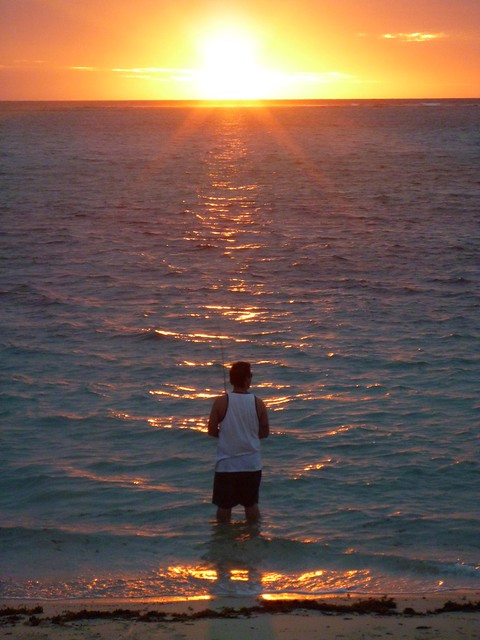 
The weather was lovely for the 1st few days and then the wind started blowing, not enough to stop us doing anything but it did take the edge of the beauty of the Ocean, still they both swam & snorkeled, used the Kayaks and went fishing. The Billy's had arrived a few days into their stay and that was excellent, we had a few good nights, fishing and though Scotty didn't get his Big Hook Up that he was after he did get onto some large fish only to be busted off, a nice Spangled Emperor caught out of the Kayak and small shark off the beach were good catches though . Our last night fishing we all got onto big fish but it was only Dave that managed to get a good sized GT onto the beach after a 30 minute fight. After the usual photos it went back to live another day. 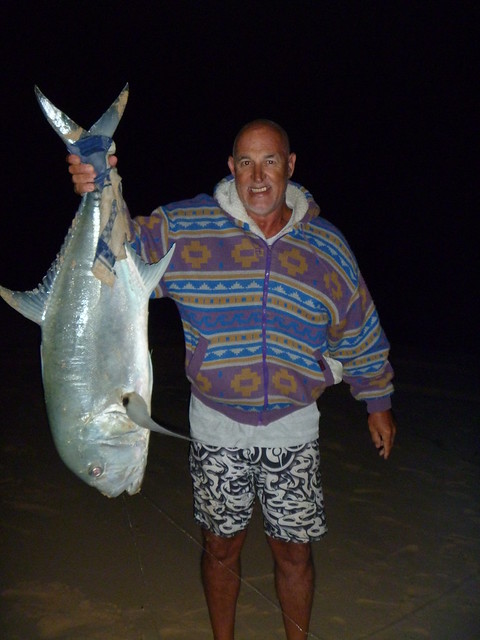 Me with Dave's GT


Our stay coincides with my Birthday and what better place to celebrate, the girls spoilt me all day and we had my favourite Lasagna for tea followed by the largest Cup Cake i have seen. Thank you all. 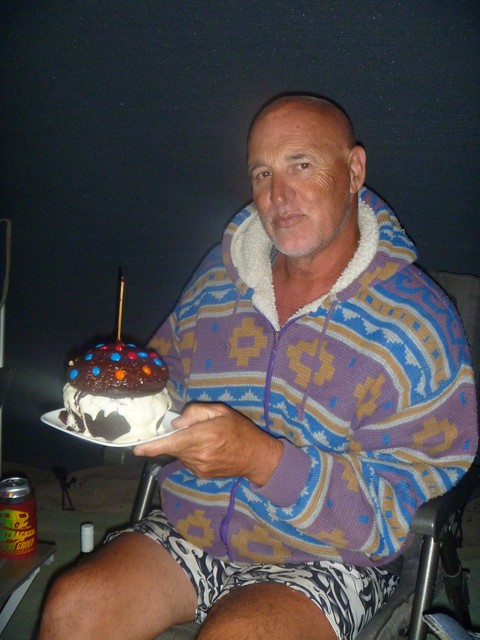 Happy Birthday To Me


Well the 10 days have been and gone, with us only having the Ute, Dave and Jo kindly drove Erin and Scotty into Exmouth where we did some more shopping before taking them to the airport for their flight back. We loved having you, in the short time you were here we hope you saw what we see and look back on it with fond memories. 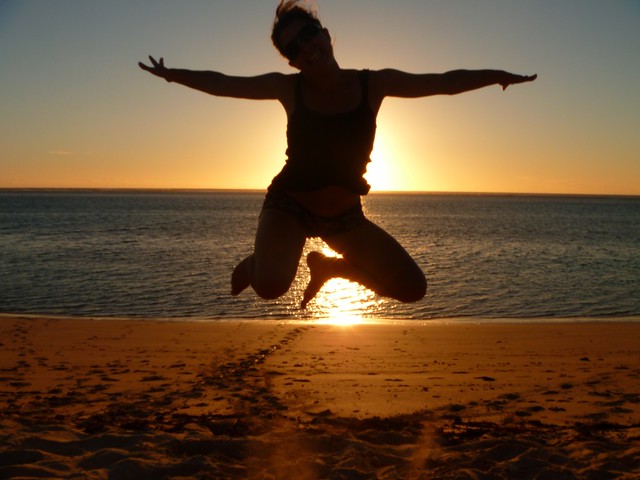 Our Beautiful baby, We love you Infinity
Posted by Mick at Thursday, May 10, 2012 4 comments: