Vickies eye treatment wasn't exactly what we were hoping for, the Dr decided to give her another injection of Avastin in the eye and see how she is in 6 weeks time and then perhaps give her some laser treatment. If that's the case she wont have to go back for 3-4 months which gives us a longer time & further distance to meander around.

But we make the most of our chances and were quite happy to leave Adelaide once again and head for Mannum on the Murray River and meet up with Kimbo & Ned and Brian & Liz who were already there waiting for us. As usual the weather god chucked everthing at us with cold & wind and wet weather but we were doing better than one family who had nothing but a tent and all their possesions inside a car. Three young chidren whom we could see not getting much food, a mother who was ill and all she was drinking was river water and a father who looked down on his luck. Apparently they had been evicted for complaining about no running water in the house they were renting. Brian & Liz cooked them up a meal, Ned kept them supplied with filtered drinking water and Vickie and i bought 3 pairs of shoes for the kids to wear. It made us feel very thankfull for what we have and our lot in life.

We stayed at Mannum for 5 nights even though it was a 48hr camp the weather was lousy and not conjusive to packing up. When we did go we only went down the road a 100k's and set ourselves up at Hogwash Bend just out of Morgan and Waikerie. Here the weather has been all 4 seasons in one day but the camp is lovely with us set up right beside the river. Kimbo & I got our boats off the roof's and set about going for a play to finally see who had the fastest boat. It was a no brainer as i kicked his butt every time and then his motor decided to play up and not idle and hard to start so after a lot of mucking around with fuel / air mixture's and idle screws we decided to best leave to the experts.

Ned's sister Liz and husband Bill also came and stayed with us for a couple of nights on their way back to Newcastle and Brian & Liz also came for 3 nights and will leave this afternoon to head back to Adelaide. We accomplised some small jobs whislt here, mainly making up charging cables with anderson plugs for everyone so vehicle auxillary batteries could be charged from the Van's solar system. Kimbo and i also modified our van door handles by strengthening them with epoxy as they are prone to breaking, Brian did his also but made a bit of a mess and upon cleaning up the solid epoxy sliced his thumb open with his leatherman knife, some Doctoring by Kimbo & myself soon had him fixed and instructions of not to touch anything else.

The Bro's intend leaving here tomorrow and heading to Paringa which is East of Renmark for another few nights alongside the Murray.

The Bushtracker [BOG] Muster was great fun, the weather we copped was not. Winds & dust storms are not fun along with temperatures around 30C for 3 days. But we always had someone to chat to and something to do, the organised events broke up the time we were there, the spit roast was great and the open garden day very enjoyable, but the highlight was the 'Dimboola Wedding' what a fun time that night was! The play was very entertaining & meal delicious. 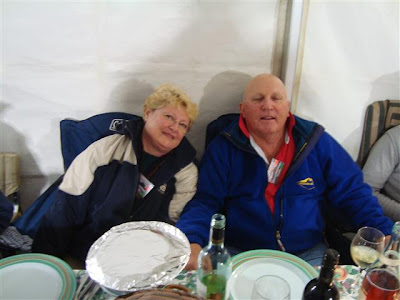 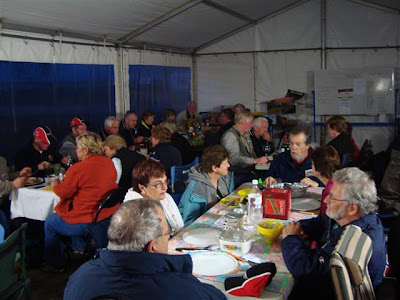 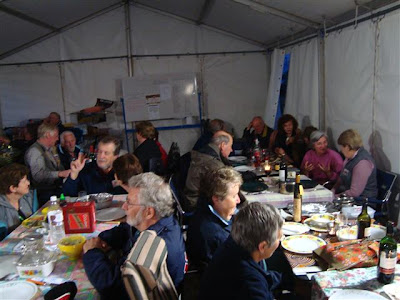 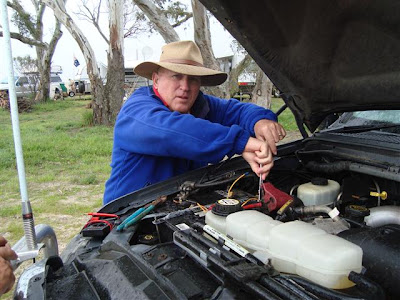 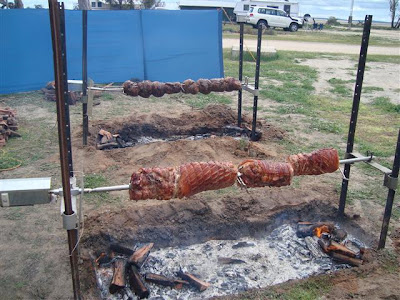 With the winds still howling in the afternoon's we used the lull in the morning to put everything away in preparation for an early leave on Sunday morning, we got to say goodbye to many but other's we missed so please take this as a 'See ya & catch ya on a track somewhere' goodbye. 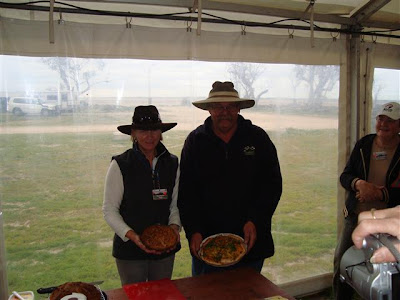 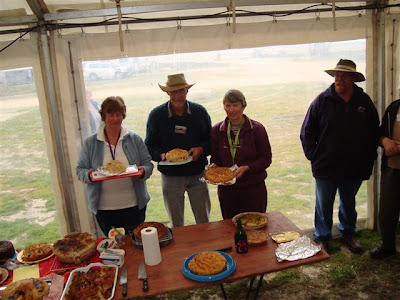 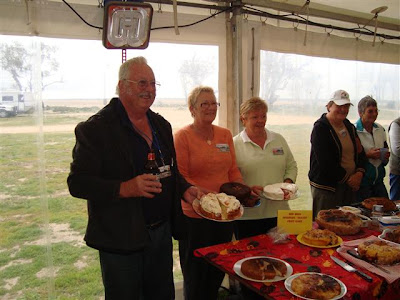 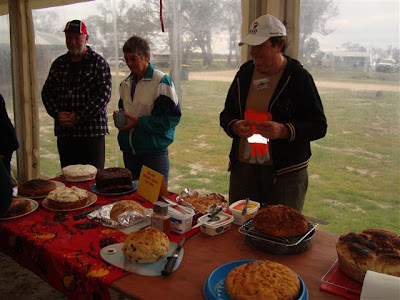 The winds picked up again as we were heading to Mannum where we were catching up with Kimbo & Ned again for a couple of nights before we had to head to Adelaide for Vickie's eye treatment. As usual we had a great time with our Mates and have planned on catching up again on the weekend and travel along the Murray River with them. 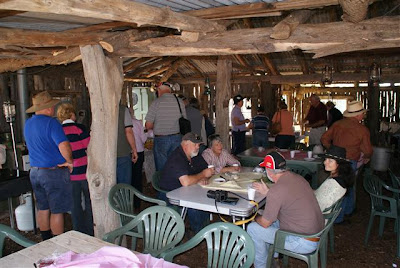 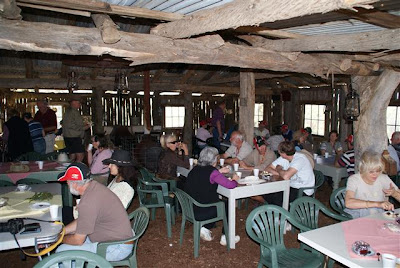 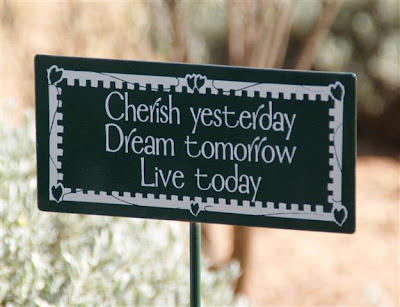 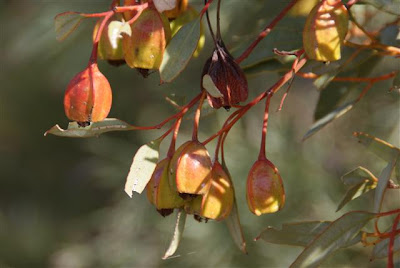 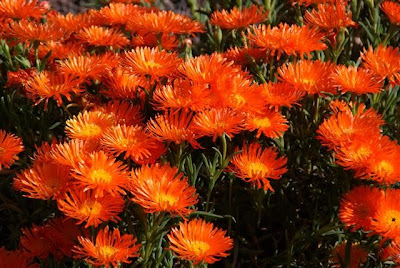 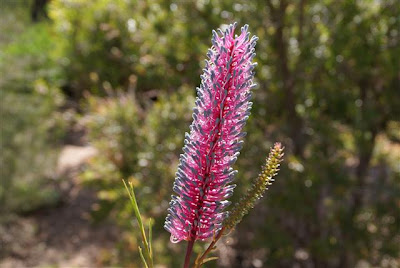 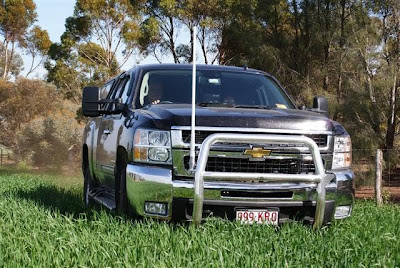 Back in Glenelg at our daughters place we have caught up with all the washing and gave the rig a clean. We lashed out and bought a Lemair washing machine and a 150lt water bladder to enable us to stay out in the 'bush' for longer. The Effy is booked in tomorrow to have it's windscreen replaced, then a last minute re-stock and we should be back on the road in the Afternoon or Saturday at the latest.

At last a beautiful camp beside a river, the Murrumbidgee at Darlington Point was our camps for a few days, having not seen the river before we were unsure as to what condition it was but we could be certain that it wasn't like it looked a 100 years ago, much like the Murray it was low in water in parts.

We had rain the last night we were there and the drive out was interesting as the track had turned to bog and the rig was slipping and sliding even in 4WD it was at crawl speed that we used to eventually get onto some hard surface. Two kilometres and the wheel arches of the truck & Van were clogged full off mud. Luckily it continued to rain and once on the bitumen most of the mud soon cleaned itself off.

Heading down to the Victorian border we stayed again at Vinifera Forest where we camped a few months earlier. Another lovely spot and no mud but we were rained upon for most of the time we were camped there. It was then time to head to Swan Hill and go to a Van Park so we could re-stock, fill the water tanks and catch up with the washing. Two nights in a Van Park is long enough for me and i was itching to get back out in the 'bush', we had 5 nights before the Bushtracker Muster at Jeparit so we headed to Sea Lake looking for a camp, it wasn't untill we found a beautiful spot called Yaapeeta Beach that we decided to prop for a few days. We camped on the lake that dry and covered in lush green grass, plenty of firewood and mob's of Roo's & Galah's to keep us interested.

On the 3rd day we were joined by 3 other Bushtrackers enroute to Jeparit, Brian & Marg, Murray & Judy, & Rosco & Chris. It was great to catch up and we had a roaring fire and enjoyable evening. The next morning we drove the 45klms for Jeparit and Lake Hindmarsh where already around 20-30 Vans were already set up, we didn't waste time in choosing our patch of ground and getting our camps organized. Then it was just a matter of having a walk around and doing the meet & greet and putting names to faces.

Now the 2nd day we have been here, the weather is ranging from blue sunny sky's to overcast, wind rain & cold, last night was beautiful with clear sky and no wind and a group of us sat around a large fire chatting away & enjoying each other's company.