Plans .. We have heard the term used that God laughs at those that make plans, we have never been ones to travel to a structured plan as we prefer to go with the flow and have no time limit on places we end up. Kilcoy was one of the very few 'plans' that we agreed to give it a go. It will also be the very last especially in the situation that we found ourselves.

What was supposed to be a 10 week stay on a 388acre property turned into a stressful dissapointing three week's. It had been agreed that our children were welcome to come and visit whilst we were farm sitting, an opportunity that our daughter's jumped at as neither had taken a holiday for many years and looked forward to seeing a small part of Queensland. This was all arranged last August and though we choose to drive the rig back to Perth for Christmas and return to Qld in February we weighed the cost of of doing so with being based for two & a half months and agreed to help out the owners of the property so they could go away for a holiday.

Problems started early with the floods in the district, unable to get into the property due to the river flooding we stayed at Somerset Dam for a few days, there we were visited by the owners and assured that all was as planned and they would call us when the river levels dropped sufficiently to enable us to get the rig across, this happened a few days later and we were pleased to be finally on the property.

We expected the owners to take a couple of days to show us around and get themselves ready to leave but this stretched out to two weeks, during this time the owners told us that their plans had changed and that they were putting the farm on the market and asked us when our children would be arriving and how long they would stay, this was all out in the open as we had mentioned dates many times before, we felt a dark cloud come over us as we thought about the expenses our kids & we had incurred with non refundable airfares. We mentioned to the owners that if they felt they didn't want to go away with their property on the market to let us know and we would have time to make other arrangements, we mentioned this three times to them and each time we were assured that they would go away as they dearly needed a break and all would work in with our kids stay,

The Best laid plans ....... not only did they wait untill the very day our youngest daughter & partner arrived from SA, they only went away for 2 nights before arriving back for the day, away they went again for the night and back again next morning, ..... How could we expect to 'relax' and enjoy our stay when we felt on edge all the time. Again they left and this time we thought they would be gone for the next 3 weeks at least but after 4 days they came back and told us they were back to stay ...... not even the courtesy of a phone call to say 'sorry our plans have changed we coming home' ..... Is it any wonder Vickie's stress levels increased and her damaged eye had another bleed which resulted in more visits to the specialists for treatment.

Arriving back unannounced was the straw that broke the camels back, we had nothing to hide and were quite proud how we looking after the place & grounds from working my guts out mowing acres of lawns, whipper snipping acres of fence lines and pressure cleaning paths, with Vickie attending to the house and making sure everything was neat & tidy at all times ..... we had the owner's return after four days away without the courtesy to let us know.

We are very dissapointed that even though we gave these people the chance to alter their plans, they assured us they were people who kept to their word, obviously not ..... Regardless, i am a believer in Kharma and we hope their plans go the way they hope they do. We hope the dogs are well and don't miss us to much.
Posted by Mick at Monday, March 29, 2010 No comments:

Eventually the rain stopped and things have started to dry out, we have been helping around the property mainly whipper snipping and mowing the extensive lawns and fence lines. It's hot & sweaty work but i have enjoyed doing it, one job i undertook whilst David & Maureen were away for the day was removing a large tree limb that hung precariously over a post & rail fence, i was certainly conscious of the limb falling and damaging the fence or worse landing on me, they aren't called Widow Makers for nothing. But with my usual multi talented skills [insert smiley] i was able to get it down, cut up and removed with no damage.

It is a very attractive property with beautiful views it has Vickie & i dreaming about owning something similar but on a couple of acres, not 400.

We are not sure when the owners are leaving on their holiday, one of our daughters arrives next Wed or Thursday so we are concerned & hope that it will be soon.

With not much happening other than farm work i probably won't be updating the site as much as i do when on the road.
Posted by Mick at Wednesday, March 10, 2010 No comments:

Third night at Crows Nest Caravan Park, it's raining heavily and has been for the time we have been here, the property we are going to look after is cut off as the only entry in is across a culvert and the river has risen and is 20-30 metres across and flowing fast, David & Maureen have seen it up before but this is the highest, so that leaves us all waiting for the weather to abate before they can leave on their holiday and we can move in. 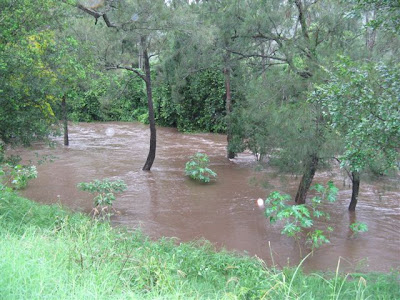 That road in the distance is the private road in to the farm, the culvert & creek is usually only around a few metres wide. 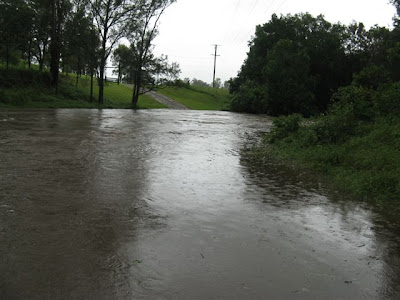 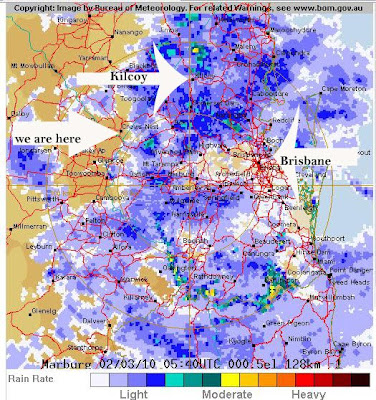 We went for a drive to Toowoomba yesterday, the rest of the time we have been reading or watching movies in the Van. Tomorrow we may move to Kilcoy and take up residence at the Kilcoy Showgrounds.

Well we did move and we did call into the Showgrounds at Kilcoy, what previously was an attractive camp at $8 with power has increased to $15 and with the recent rain it was a soft boggy area full of long grass, so we went and checked out the site in Kilcoy but it was closed off due to the rain, so we drove another 20klms East to Cruice Park, it's still raining but at least we are camped on solid ground for the night at no cost.

Shires need to realise that travellers spend money when they are camped in close proximity to a town, not all of us require a caravan park with all amenities. By not welcoming us & travellers like us they miss out on valuable dollars.

Thursday, The water levels at the entrance to the Kilcoy property have dropped dramatically so we crossed the creek and now here. 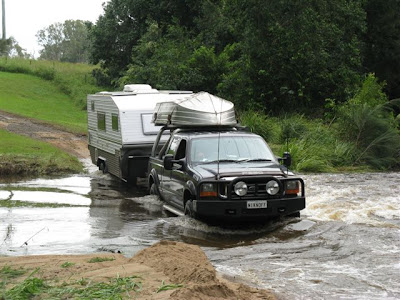 It is a beautiful property with rolling hills covered in a fine mist of rain, we hope that things start to dry out as there are plenty of jobs to do before David & Maureen can head off on their holiday.
Posted by Mick at Monday, March 01, 2010 No comments: