In September 2016 I reversed our caravan into the corner of our house, I must have reversed it a hundred times in the previous 9 years but this one time it bit me on the ass. After the customary cursing and self humiliation I calmed down and accepted what had happened and what needed to be done to fix it. The house was the simple part, a call to RACWA whom we are insured with and within a few days I had an assessor out to look at the damage, another couple of weeks went by and it was all repaired, no fuss, no pain just an excess payment on our insurance policy. 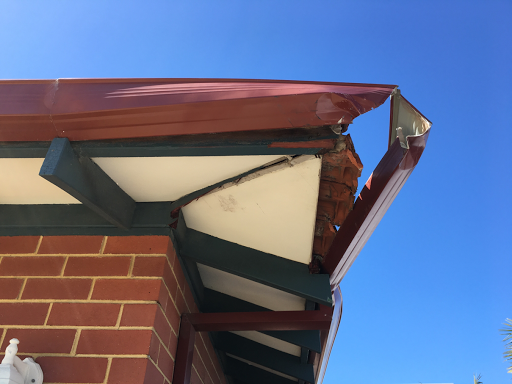 The caravan is not so simple, because of the extent of damage done I did not feel confident in having any caravan repairer do the repairs, I have heard of to many horror stories and we wanted the best repair job possible. Now our van is a Bushtracker made in Queensland which meant me taking the van over to get repaired which is 5000klms away from where we live, way over on the opposite side of Australia. I'm always up for a drive so the distance wouldn't bother me but for it to fit in with our other plans for the forth coming year it meant booking it in for January, and January is usually very hot and windy.

Because of the nature of the trip Vickie choose to stay home and have more grand daughter time with our girls plus the damage to the van meant it did not have a hot water system which also meant no non-potable water could be carried because the pump system involves filling the HWS tank which was damaged. So a drive to Bushtracker was to be a solo trip and one in hot weather, I left on Friday the 13th which I hoped was not an omen, my 1st night I stopped approximately 70k east of Norseman, the temperature was quite pleasant and I got a reasonable nights sleep even though my lower back and left leg was spasming from the seating position which I had trouble getting comfortable.

Up and on the road the next day was one of buffeting head and side winds, I had recently had a torque converter lock up kit fitted to my Landcruiser 200 series and I'm very glad I did, the characteristics of the automatic was completely changed with the gearbox now holding its gear without a continual unlock and locking and kicking back a gear. Economy even with the gusty winds was a very reasonable 21Lph, my 2nd night was spent along the Great Australian Bight not far from the Nullabour Roadhouse. The winds right next to the coast threatened to just about roll me over but I had a great night getting lulled to sleep with the van rocking. 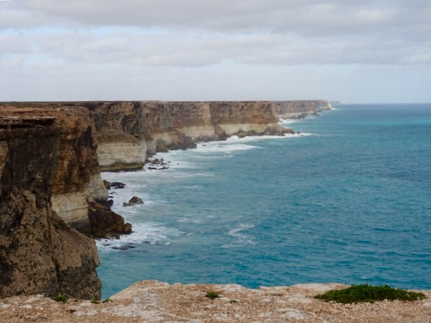 After a walk around the cliff face and a few photos I was back on the road, we always stop for fuel at Penong and a cup of tea at the Cemetery, many years ago we went by as the funeral of a local was being conducted, we found out it was a fella by the name is Sid Maine Brook and since then we've always stopped and boiled the kettle and said hello. This time I found Sid had company with I presume his wife buried beside him. 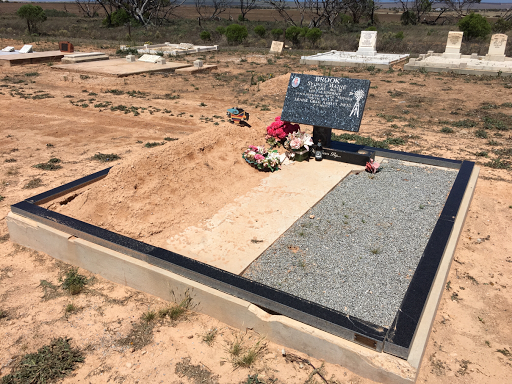 Because of the time difference I had a few hours up my sleeve so I made the call to some friends who live in Streaky Bay to see if they were around, as luck had it they were so it was a detour down to Streaky to catch up with Lloyd and Heather who are also BushTracker owners. Lloyd now has an Iveco Daily as their tow vehicle and what a monster truck it is, no expense spared here this truck had it all. Lloyd excelled on the BBQ also and cooked a superb roast leg of lamb, a few beers and long chat and the night passed far to quickly. The next morning we went to their daughters cafe for breakfast and said our farewell. 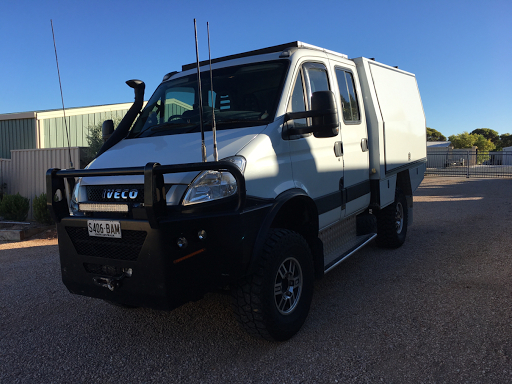 Back on the road and the temperature was soaring, forecast for 48 degree my cars outside temp reading was showing 45! Apart from stopping for fuel and getting something to eat and drink I just kept on driving, when I did stop around 8pm it was still light because of the daylight saving, the flies were annoying and the mozzies even worse. Temperature in the van was 41 degree at 10pm and after a uncomfortable sweaty night it was still 39 degrees in the early morning. At 4.30am (7am WA time) I was back on the road with the air conditioning blasting. Driving up through Broken Hill, Willcania, Cobar is a fairly uninteresting drive, lots of wide open space with very little to attract the eyes. 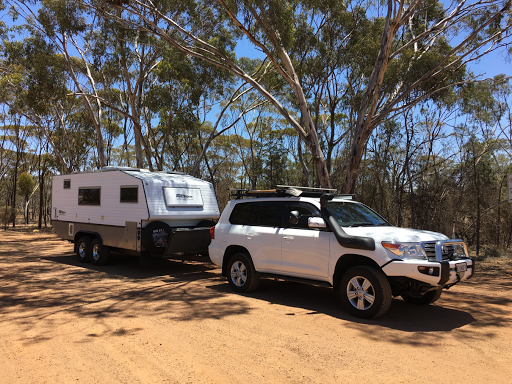 My 4th night was spent at a free camp in the town of .......... it was BLOODY Hot ! I couldn't even cool down with a cold shower so it was another uncomfortable night sleep. I was heading for Kenilworth, no particular reason except for basing myself for a few days before taking the van in. Plus I knew Kenilworth had 240v power and toilets and shower facilities, and I needed all three. Coming in the way i did involved passing Blackbutt .. now Blackbutt has a bakery and not just any bakery but one of the best in Australia!  They must have known I was coming because I had the V.I.P parking directly out the front, unfortunately most of the pies had been sold but I did manage to buy a 'Jacks Ribs' Pie which is smoked ribs with the meat pulled off and placed in a pie, it was simply delicious, a blue ribbon winner in my opinion, I wish they had more than one, they didn't so I had to settle for four other variety's and a Beesting Cake just to finish it off ... No I did not eat five pies, just the one, the others were for future meals, which is probably surprising for those that know me. 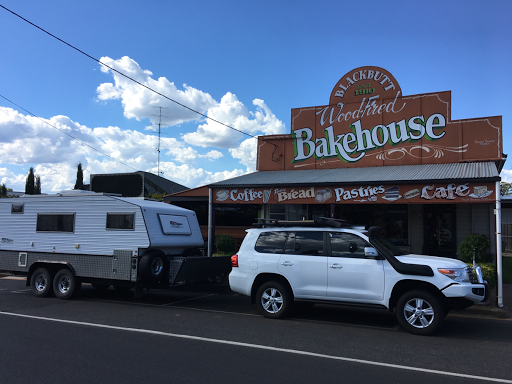 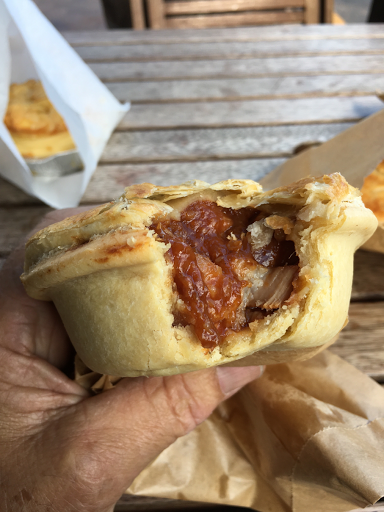 Finally at Kenilworth I connected to power and rolled out the awning, poured myself a ice cold bourbon and coke and relaxed. The next four days I spent  driving to Noosaville looking for accomodation, driving to Eumundi markets and driving to Mapleton, Montville and Malaney, anywhere to enjoy the ice cold car air conditioning. I have found accomodation at Noosaville, a lovely unit part of the Noosa Sun complex. It's directly opposite the Noosa river and the yacht club, it is very comfortable and lacks for nothing. I have visited the Noosa National Park which is just stunning. 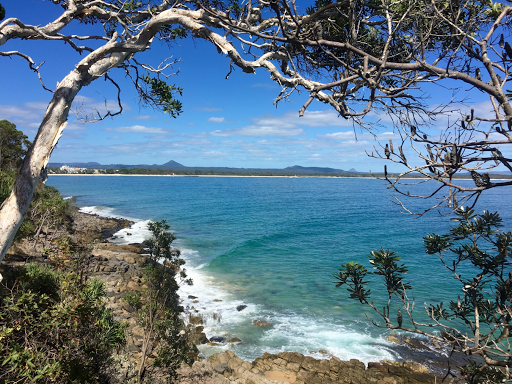 I was impressed with the lock up torque converter, I was finally able to tow in S5 and achieve quite good economy with figures ranging from mid 17's to 19's litres per hundred with speeds around 95-100kph. 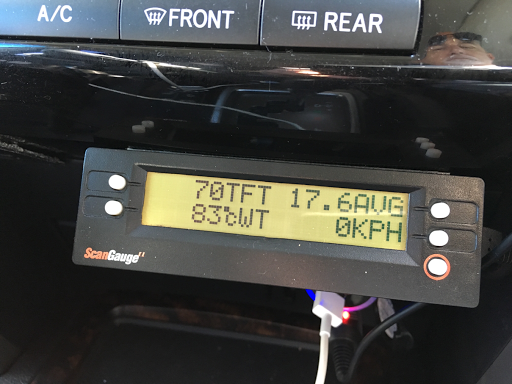 I have dropped the van off at Bushtracker, it appears it may take longer than expected due to the work required. It's of no real concern, I'm comfortable and Vickie will fly over end of next week to join me.
Posted by Mick at Tuesday, January 24, 2017 6 comments: