80 Mile beach, It's a pity i dont have any before photo's to show the amount of damage caused by the cyclone on the 21st December 2009 but the aftermath is easily seen on the 9klm drive in, the scrub land has been flattened and barely a tree left standing in the park itself. 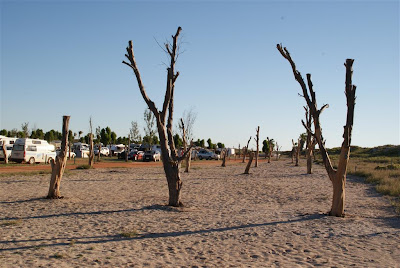 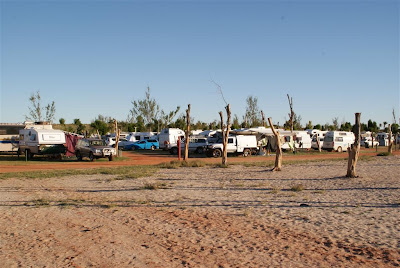 The Van park is large and reasonably spacious, we asked to stay two night's and were given a site where we found two other Bushtracker Vans already set up opposite and beside our site, i wondered whether this was a coincidence or they group people together rated on what they towed ... As things turned out one couple kept completely to themselves whilst the other couple made the effort to say hello, we did feel the 'odd Man' out.

We had heard from other campers that a 4WD had been submerged on the beach that afternoon and another 4WD had rolled on the beach, a walk to the car park revealed the rolled 4WD, luckily no one was hurt as it had extensive damage to the roof and glass damage, most certainly an expensive repair bill if not a write off. The submerged 4wd was definately a write off, being left overnight due to the high 6mt tides it surprised me that it was still sitting on it's wheel's the next low tide more than 20 hours later. At first all we could see was the shape of the roof rippling on the outgoing tide, as the time ticked by it revealed itself with very little noticeable damage visually from a distance, of course being submerged in salt water for any time let alone nearly a day meant it was destined for the scrap heap but the owners were responsible to have the vehicle removed at their expense. I heard prices mentioned of $5k recovery and though it wasn't my decision to give it a go in salvaging it, i was one of many that leant some muscle in dragging it out of it's salty grave. 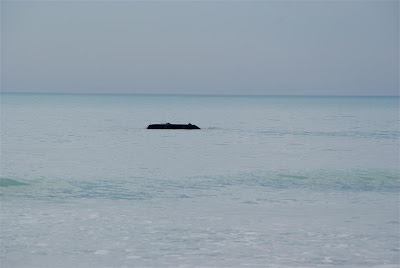 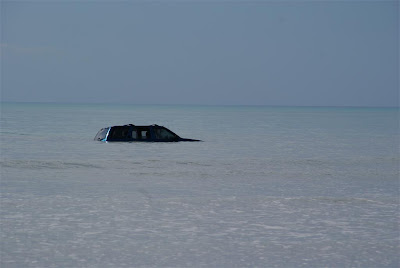 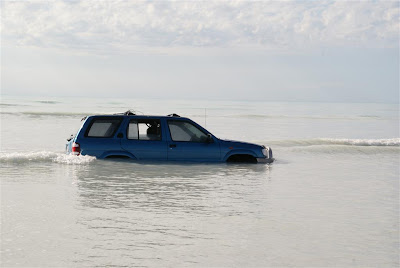 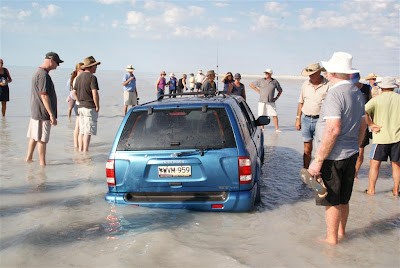 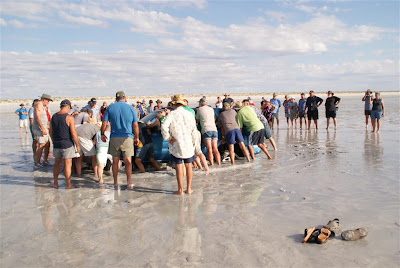 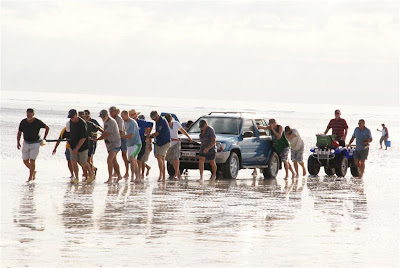 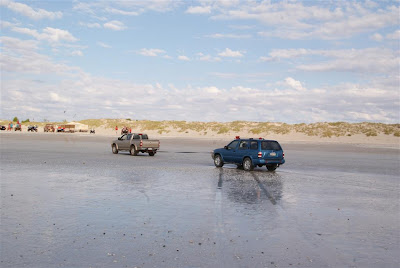 I didn't bother fishing at 80 Mile, i did see one Giant Threadfin Salmon caught of a decent size but that was it. I helped another Caravanner check his electric brakes and found the magnet had broken so it was disabled, sufficient enough to get them down to Port Hedland where it could be repaired properly.

Next stop was Port Smith, we have stayed here before and liked it enough to come back, we remembered the sand flies were bad back then and things were the same this time. Last time i paid my $2 and went on the Park's boat trip across to the point and spent 4 hours fishing before being picked up, Vickie was laid up with a sore back so didn't do it, this time all was good so we both took the ride over. The fishing wasn't as good this time but i did manage to catch two GT's and 1/2 dozen Longtom's which i released to swim another day. 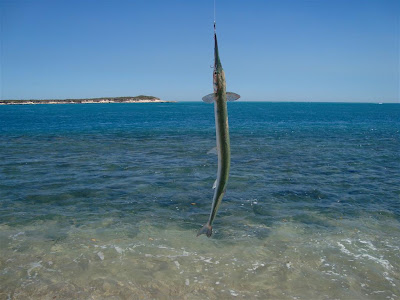 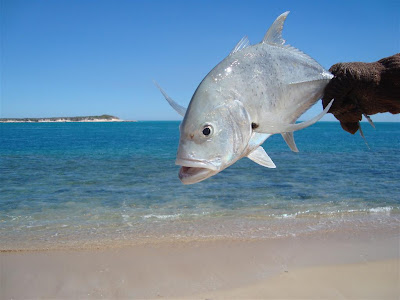 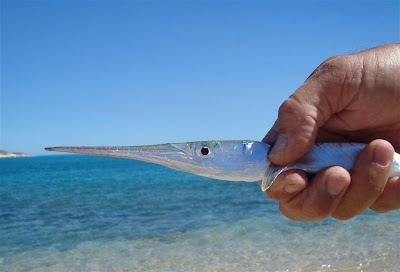 With temperatures in the high 30's we found a lovely tidal creek and had a refreshing dip :-) 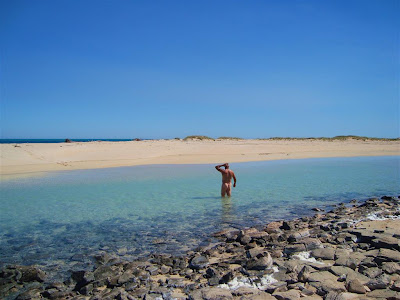 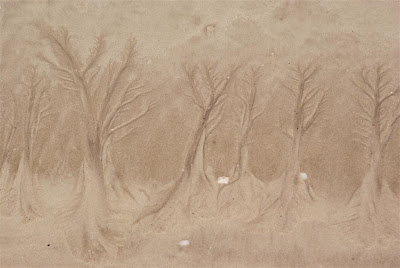 Having visited all of these places before we tossed the idea of staying longer and putting the Kayak's in but decided not to, instead we drove onto Broome where we intend staying a couple of days & re-stock before heading up the Gibb River Road.
We always give Broome Caravan Park a go 1st and have never been turned away by Graham the owner, he remembers us from previous visit's, even remembering what vehicle we drove at the time. The park is busy and site's are cramped but we are happy that we were not turned away, but two days here in Broome is enough and it's onto the GRR where hopefully things are less hectic.
Posted by Mick at Wednesday, July 28, 2010 No comments:

We stuck it out another week, such hardships we have to endure ..... the last three days were very windy and overcast but we did manage to get the Yak's out for one last fish. This time it was Trev's turn to catch the only fish caught and with the water getting rougher we left it at that. Back at camp it was pack up time and we were on the track out the next day, stopping at the Homestead to say our thanks and collect our key deposit back we were soon on the blacktop and heading further North.

We took the Burkett Road which saves us going back to Minilya and comes out on the North Coastal Highway further up, we stayed the night at a free camp site alongside the [......] river, we noticed a cross in the bush and went and checked it out, a simple white cross with PANDA written on it, Vickie also noticed another cross further away that had Colin & Panda written on it, it wasn't untill we were talking to our mates Allan & Joyce at Karratha that we were told the story and how Colin was a friend of theirs & Panda was his beloved dog and they died after being hit & killed in a car accident whilst slowing or turning into the camp area. [The Details are sketchy as to how it exactly happened]

With that news and also hearing that a good friend of ours in Sydney was not travelling well health wise made us think just how fortunate we are to be able to live the life that we do.

We plan to only stay a couple of nights here, long enough to re-stock with food and catch up with our mail and then move further North, possibly 80 Mile beach.
Posted by Mick at Wednesday, July 21, 2010 No comments:

The past couple of weeks has involved the School holiday's so the South Lefroy Bay area has been very busy with campers with kids, the past two days things have settled back to 'normal' though what is normal up here? The wind is annoying, each day we hope that it stops so we can get back out on the water but the Wind God is not listening to us. Not much we can do about it so we have been doing lot's of reading & sitting around.

Our Nephew Trevor and his girlfriend Ashley arrived last Friday, they were up here camped with Trev's parents Dave & Jo before we arrived but had to return to Perth to finish work and organize affairs before embarking on the Around Australia Trip, what a life 25 years of age, secure trade's behind them and the exciting adventure of travelling around Oz. Trev has a F250 and a camper trailer and they are getting better set up each spot they stay.

Not much else is new other than our internet connection has finally been established with the new modem that BigPond sent us, signal is not 24 hour reliable but it does enable me to check the email and update the Blog each evening and morning.

Fishing has been quiet due to us not being able to get out on the water, Vickie has hooked onto a few Golden Trevally and i caught a good sized Queeny which put up a good jumping fight. We are planning on staying another week and then move on unless the weather improves.
Posted by Mick at Tuesday, July 13, 2010 2 comments:

Three weeks have passed since arriving at South Lefroy Bay, Ningaloo. The weather has been a mixed bag of beautiful sunny day’s to overcast rainy & windy weather, but that is the West Australian Coast and we don’t let it bother us much, we always find something to do even if it’s just refilling the water tanks or taking a drive along the Coastal Track to Coral Bay like we did last Friday.

It’s a full day drive even though it’s only around 70klm to Coral Bay, by the time we drive down every side track and walk up and down the deserted beaches finding many treasures such as washed up numerous fishing lures, a boogy board and Vickie found a fishing knife still in it’s sheaf. The track is rough & corrugated in places but nothing any 4wd couldn’t handle easily. Of course a day to Coral Bay is not complete without having lunch at the Bakery, some of the best pie’s and cake’s can be found here.


Around 4pm we decided to head on back to camp, Dave accidently locked his keys in his Landcruiser. It took us an hour to finally get the rear door’s open using wire and relayed information as to where to place the wire as the ‘wire holder’ Dave couldn’t see what he was doing.

We managed to get out on the water with the Kayak’s on Saturday, it was a lovely day with crystal clear water but not many fish about. Vickie caught some large Chinaman Cod or Charlie Courts as they are more known as here, I caught some small Redthroat and Dave had fun with some Long Tom’s.

Other than that it’s our son’s Birthday today the 27th , Best Wishes to you Dan we would love to be able to give you a hug but a phone call will have to do.
Another week has passed and we have settled into the routine of fishing from the beach, fishing from the Kayak’s, collecting water, emptying the loo, eating & happy hour’s. We had one fantastic day where Dave & I were fishing off the beach and doing well with a mixture of Trevally & Spangled Emperor, and Vickie out in her Kayak having a ball catching 4 large Golden Trevally, it was great to see her finally catch some fish that gave her a tussle, she did extremely well fighting them and getting them into the Yak, she has some bruises to prove how hard they fought.
We all drove into Exmouth to attend a World Heritage meeting at the Rec Centre, apparently the Ningaloo Coastline and the Cape Range has been put up for World Heritage listing by the Federal & State Govt, this has been done with minimal consultation with the local Shire, Pastoral lease owners & the general public and there has been an angry backlash, the meeting we went to was attended by over 100 people with another meeting that evening having 400 + people going along. Plenty of questions were asked and no definate answers were given, from what i could understand is, ‘If the area meets the criteria of the World Heritage Council’ then it’s just a rubber stamp and hand balled over to DEC [CALM] to manage, if that happens we can all say goodbye to the Coast as we know it.

Saturday the 3rd, The Billy’s were leaving for home after camping here for two Months and we had to break camp and move 600mts up the beach to another camp site as our camp was booked out, it was sad seeing them go as they are good company and even though they are family they are great mates and we enjoyed camping with them. Our new camp is out in the open on the beach flats, it’s ok but not as nice as where we were. We spent the day setting up camp again and dissapointed that we don’t get reliable phone or internet signal, even a drive up into the dunes where i have received signal before didn’t work so not sure when i will get to upload the latest blog.