BushTracker repaired, back on the road.

After three weeks we finally picked up our BushTracker from the factory. As usual they had done an awesome job in fixing the damage, it took longer than they first thought because of some water damage that involved removing and replacing all the internal walls at the rear of the van plus a section of flooring was also replaced. Also I had BT repair a cracked ceiling panel near the bed. How that happened I have no idea other than possibly hitting my head whilst standing on the shoe cupboard, I certainly don't recall doing it. 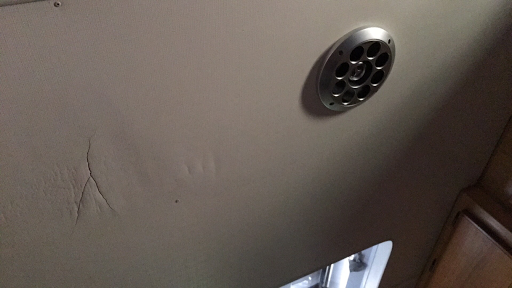 Mysterious cracks and damage appeared on the ceiling. 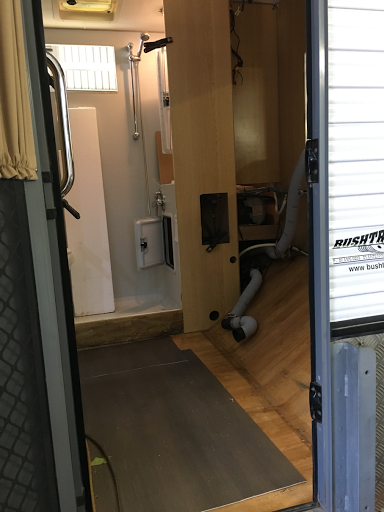 Above and below, the caravan getting the damage repaired 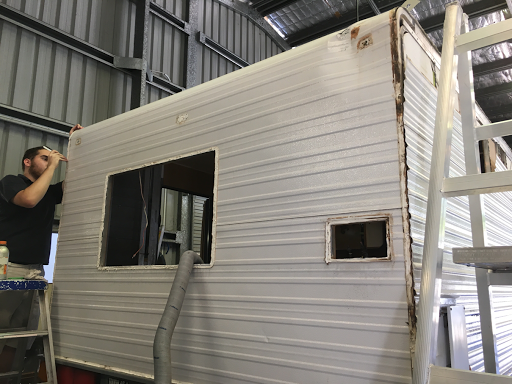 Prior to leaving the factory Daniel from Leisure Entertainment came to make sure the Oyster Sat was working properly after having its LNB replaced, it's just as well because it wasn't. After an hour of checking everything over he then discovered that the LNB had been fitted in the same way it came off and it was out of its settings, we had always complained that our signal strength wasn't very good and that gusty wind would cause the signal to drop out. Well after realising that and refitting it in the correct position it tuned in straight away and signal quality was up in the high 90's

Finally after that delay we hit the road, heading to Kilcoy for the night. 1/2 way there we got smashed by a huge storm that threw rain down like rivers at us, visibility was about zero and we crawled along with our hazard lights flashing. Pulling into the free camp at Kilcoy the rain miraculously stopped. It was then we found we had a water leak in the ceiling, the same place where the panel had been replaced. We had no choice but to return to the factory the next morning, fortunately the guys were quick to find the problem, a screw had become loose on one of the original solar panels. The panel was taken off and new sikaflex was used to reseal and attach the panel back on.

So take two and away we go again, this time we got past Kilcoy but we did stop at Blackbutt again .... yep, the Bakery lured us in again, this time it wasn't the Jacks Ribs that won us over but the Rodeo Pie .... Bloody Hell if this place doesn't make the best pies in Australia it would be up there that's for certain.

With our stomachs full we ventured on before stopping at a free camp site 'Mothers of ducks lagoon' It was here that I heard the familiar "We have a water leak" Grrrrr ... water was seeping out under the shower door, a quick check of the HWS system and I found no problem there, shower taps and connections all fine, eventually I discovered a split hose that carries water from the potable tank to the drink tap. The easiest fix was to isolate it, so I just cut the hose underneath the van so if the pump was turned on accidentally any water flow did not enter the van. When I'm home I will fit a new high pressure hose, whilst I'm at it I'll fit a water filter and new tap as well.

Another job to do is replace the chine bars, some know them as girder straps, they are a strengthening brace made from steel flat bar or rod that is welded below the drawbar of the caravan. It's fairly common for the early BushTracker's to snap the original rod, the fix is to cut it off and weld on 40mm x 12mm flat bar onto 40mm square hangers which is welded the bottom of the drawbar. To get us home without stressing the drawbar I have welded up the break. 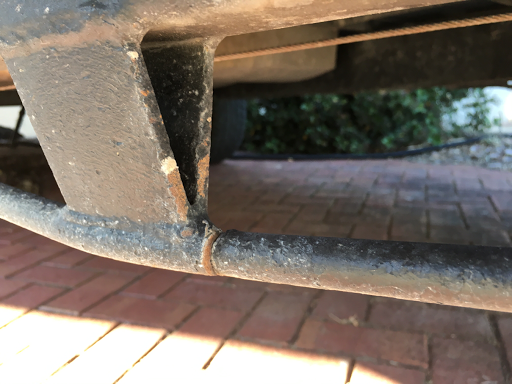 Above is the broken chine bar, below is what I will change it to 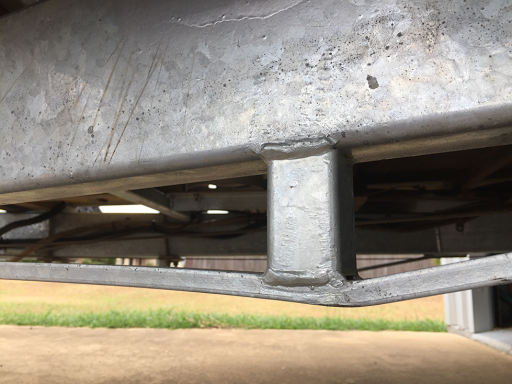 Our reason for heading down the way we did was to catch up with good mates Kimbo & Ned, we arranged to meet at Bretti Reserve in NSW not far from Gloucester, it was a very scenic drive but the last section was coming down some very steep hills, even using all my lower gears and adjusting the caravans brakes to get more stopping power the Landcruisers brakes were stinking hot. I have since found out that the disc rotors have overheated and I intend to replace them with some better DBA T3 rotors and better disc pads, another job for home.

Catching up with our mates is always good fun, the weather was stinking hot though and without a river flowing by us it would have not been as enjoyable. Three days of sitting around, in and out of the river and it was time to say our goodbyes, hopefully they will make the trip West for our next catch up. 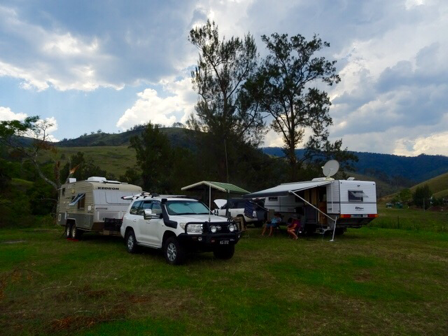 The day we left I was not expecting to get to my brothers place in Canberra but that's what we did, it was a decent day's drive and we had to stop and seek shelter from a hail storm that came pelting down.  I did not want to get hail damage especially after just having the caravan repaired let alone damage to our Landcruiser. All was good though and after 30 minutes or so we were able to venture on. We arrived at my Bro's place late in the afternoon. It's always good to see Roger & Cheryl, we may only speak a few times a year but we just catch up as if it was only last week, I was particularly taken by Rogers Porsche 911E, a beautiful old classic in mint condition. Poor Old Rog has just had a knee replacement and wasn't able to drive which was not good for his sanity. Roger also had a great collection of guns which like everything he does was given 100% effort. Leaving Canberra the next day we travelled through Cooma and the Snowy Mountains, eventually coming down to Cann River where we stopped at the beautiful Bellbird Creek Hotel. The owner Jurgen kindly allows camping behind the hotel, it is lovely location and we were quite taken by the place, and then we found out it was for sale ....... $450k freehold with licence.

No we didn't buy it, but had we been 10 or 20 years younger and a lot fitter we could have seen ourselves doing so. 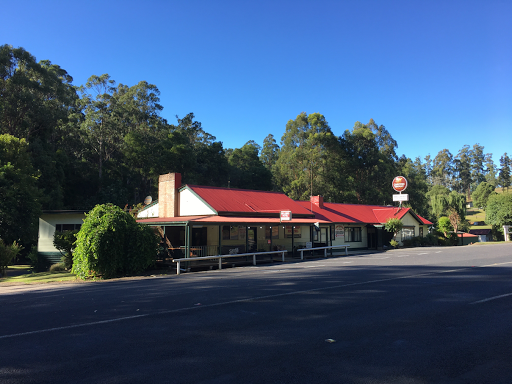 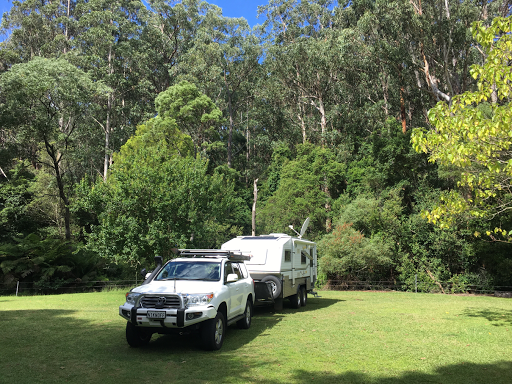 A night at Bellbird Creek and then onto Kurumburra where long time friends have moved to. Rob & Marg had a horrendous experience in their old neighbourhood where a younger drunken lout targeted them with his car after they intervened and stopped him assaulting his girlfriend. Both were injured after being hit by the idiots car, Marg receiving some very serious injuries. Plenty of charges have been directed at the driver including attempted murder and he should be put away for a while. Physically our friends are healing, but mentally they are doing it tough so it was just awesome that we were able to drop in and talk about other things and have a few laughs.

After our visit it was a relatively short drive to Mount Eliza where we were staying at Vickie's sister Sue's home for a week.