We stayed two nights at Sheringa Beach and moved on up the Peninsula stopping at Locks Well for a look and possibly i hoped, a fish. Vickie got all paranoid on me about driving down to the lower car park something we have done previously when we had the F250 so to save any 'eye explosions' i stopped at the top car park and got my rod and fishing bag and walked down the steep road to where the 291 access steps are to the beach. From the top the beach didn't look to bad, the tide was in but i thought if i can get around a rocky section i could cast into a deep hole at the Southern end. What i couldn't see until i got to the bottom was the tide was right up to the rocks and it would have been risky to try and get around and then possibly be stuck until the tide dropped, so with one single cast i then proceeded to climb back up. 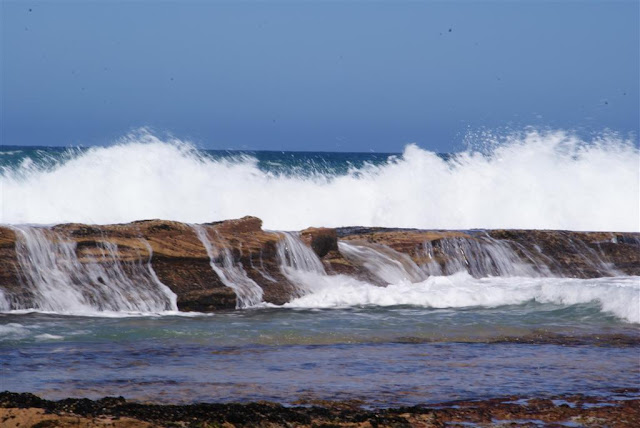 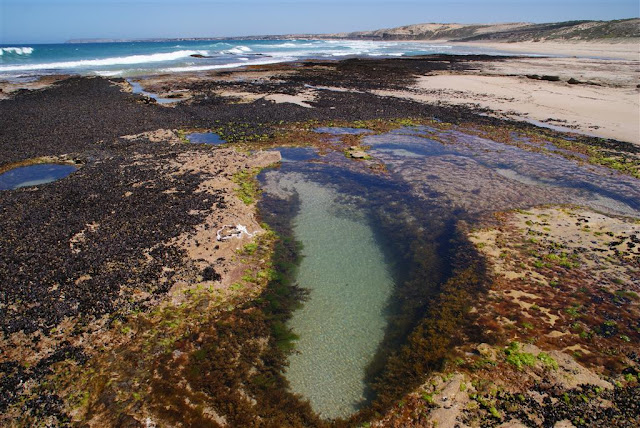 Further along the Flinders Highway we stopped at Colton Bakery, this is unlike any other bakery with just a small tin shed with loaf's of bread and rolls for sale if you get there early enough in the day as they are popular with locals and travellers. We were lucky and bought a nice tank loaf, some bread rolls and a packet of sticky buns, yum. We were heading to Streaky Bay to visit Lloyd and Heather, Bushtracker friends we met when we stayed at Streaky Bay previously, but we were also waiting for the Parker's to catch up after they visited people at Venus Bay so we decided to spend a night at Walkers Rocks, another attempt at beach fishing bought no results, the next day we continued on calling into Venus Bay and a walk out on the jetty, we spoke to a nice Italian couple who surprised us by giving us some Herring they had just caught, we had them for dinner that night and they were delicious. 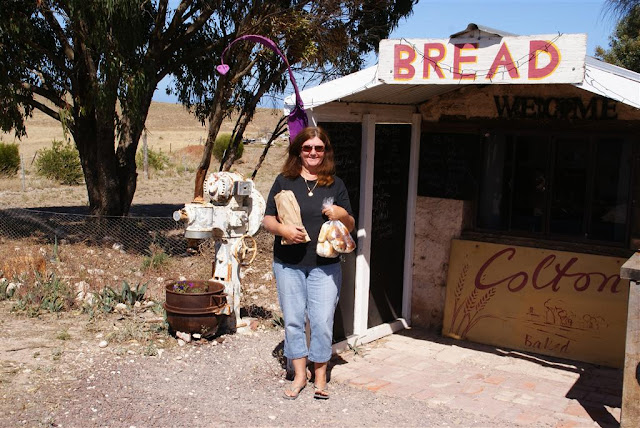 Vickie and the bread, Colton Bakery

We have been along the Westall Scenic loop before and always stop at the Inselbergs known as Murphy's Hay Stacks. These large rocks were weathered and sculpted into their present form about 100,000 years ago. Geologists say the Hay Stacks are composed of pink granite from the Hiltaba suite of rocks which were laid down some 1500 million years ago. Amazingly these beautiful pink granites were formed at a depth of 7 to 10 kilometres below the earth's surface.It was nice to see the walk trail had been extended and we were able to explore further even finding a large Bee Hive forming on one of the rocks. 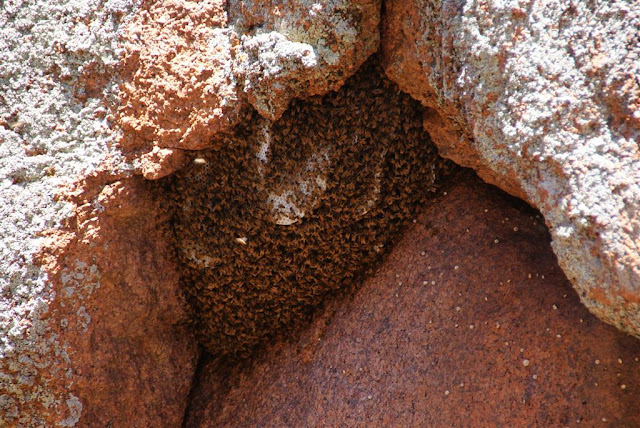 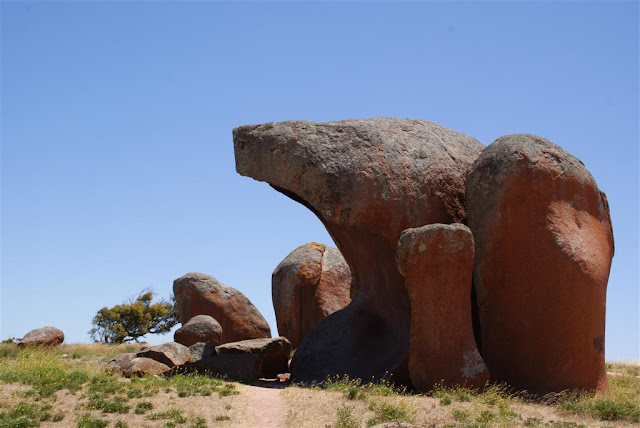 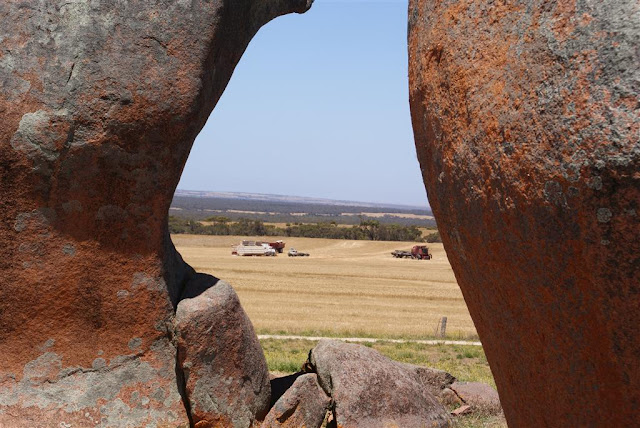 That night we stayed at Tractor Beach a free camp spot nestled in amongst shrub & low tree's close to the beach. Getting in was fiddly with the track winding in close to large rocks but after reversing in with guidance from Vickie on the UHF radio we found a nice spot where we had our own private track to the beach.. Another Van was already camped up but apart from an initial hello from a lady who mentioned that she would let us set up, we didn't see them again at all until we were leaving. 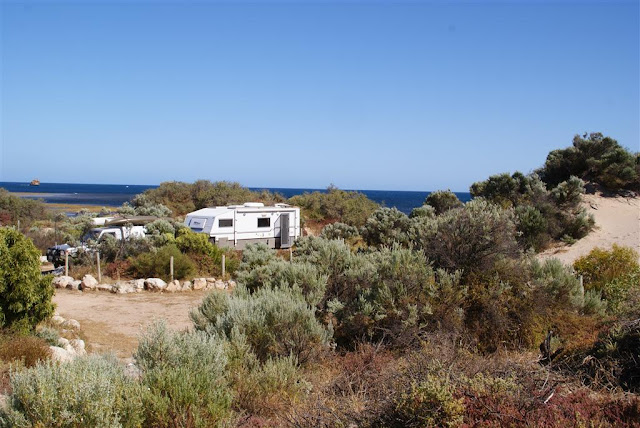 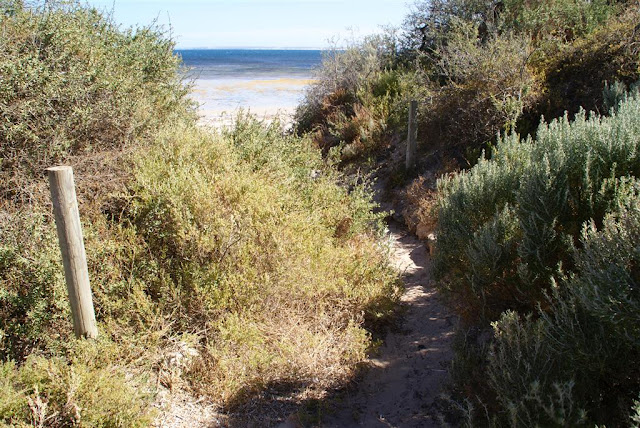 Catching up with Lloyd and Heather at their beautiful home was great, such lovely people and very easy to like. With Geoff and Vickie still a day away from joining us, Heather took Vickie into town to show her some shops while Lloyd and i set about fitting some spring retainer brackets to their new Bushtracker Caravan. Lloyd has a large shed big enough to fit their Van, cars, boat and still lots of room for a work shop, something most blokes would envy. With Lloyd doing all the crawling around underneath and me supervising the job was soon done, Lloyd showed me the new style pivot blocks for the simplicity suspension and they certainly look a better style than what was available previously, I can see another job on my list when we get home. The girls arrived back and it was time for a beer or three relaxing under their patio looking at the amazing view they have. 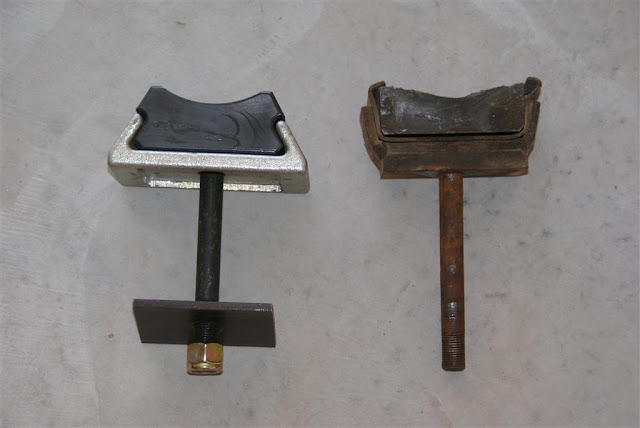 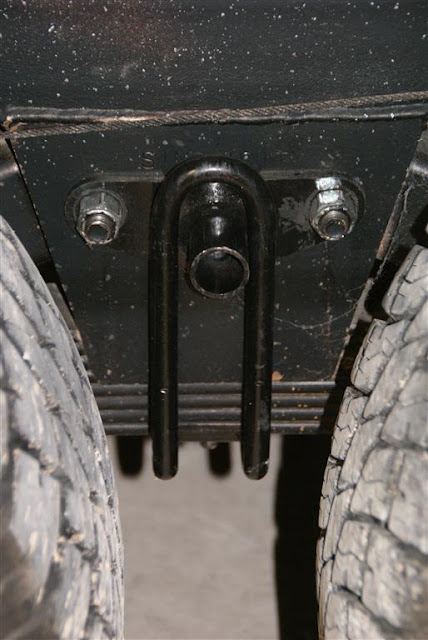 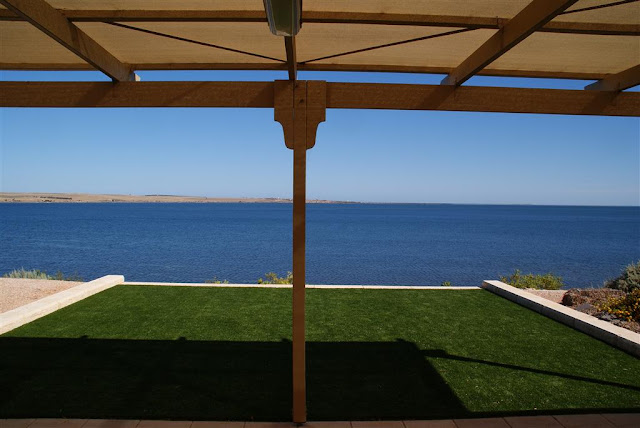 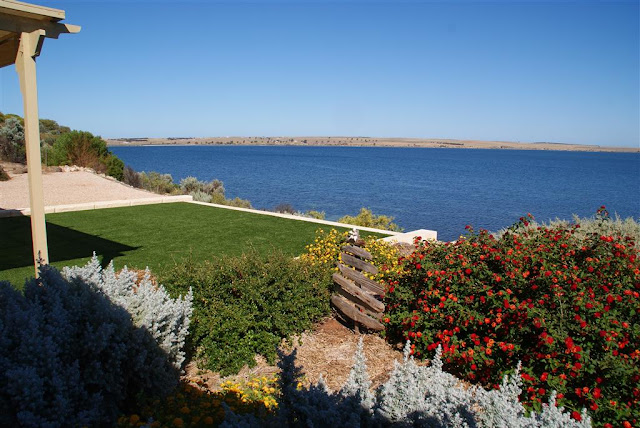 View from Lloyd and Heather's home

The next day Geoff and Vickie arrived and we spent most of the afternoon chatting before going to the Streaky Bay Hotel for a great meal. On the walk back Heather took us on a tour of town and a visit to their Daughter Ursula & Son In Law Dion's home. A beautiful old style limestone home that was once a Hospital, they have modernised it but kept all the character the buildings of this era had. Dion is a bit of a legend in the district as we found out when we saw a huge set of Great White Shark jaws hanging in their home. At the local Shell Roadhouse there is a large display of the newspaper clippings and photographs along with a replica of the 5.5mt Shark that Dion caught when he was 21 years of age on 28lb line, even though it was the largest recorded capture it was not recognized as the leader line had stretched, what that has to do with it i don't know. 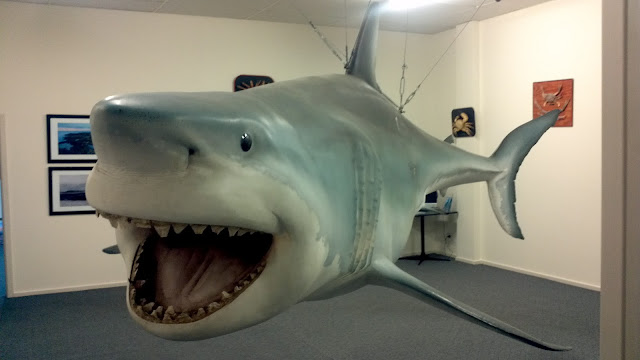 Photo courtesy of Saltwater Cowboy his phone worked mine didn't.

Early the next morning Lloyd and Heather drove to Adelaide leaving us to re-fill our water tanks and take both our rigs around to the local silo's weighbridge to check our total weights. Suffice to say Parker's Van was less than ours by around 400kg and not unexpected, luckily we are heading home to unload some gear. By mid morning we were leaving Streaky Bay and heading towards Ceduna & the West.
Posted by Mick at Wednesday, December 07, 2011